Angiosarcoma of the breast, a forgotten tumor

Fig. 3: Same patient in figure 1. Ultrasonography of the right breast demonstrate an...

Fig. 4: Same patient in figure 2. Ultrasonography of the left breast demonstrate an...

In this work the key imaging findings (in mammography, ultrasonography and breast MRI) of these neoplasms, with radiologic-pathologic correlation, are revised.

Although radiological findings are often nonspecific there are signs that can guide us towards its diagnosis.

· Mammograms may appear normal in a third of cases (more often in cases of primary angiosarcoma due to these women are young and often they have a dense breast parenchyma that obscure the lesions).

· Other times only skin thickening is noted (Fig. 1). This finding is sometimes overlooked because it may be misinterpreted as skin changes secondary to radiotherapy. 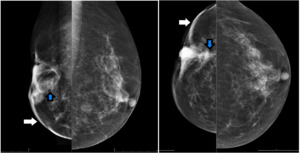 Fig. 1: 55 years old women with right breast cancer treated with radiation therapy + lumpectomy. MLO and CC shows skin thickening (white arrows) in lower quadrants and a mass (blue arrows) in the middle of the lower outer and inner quadrants of the right breast with mixed density and ill-defined margins.

· However, a mass is the most common manifestation (Fig. 1 and Fig. 2). This mass may present a wide spectrum of imaging characteristics:

o Shape: round or oval. 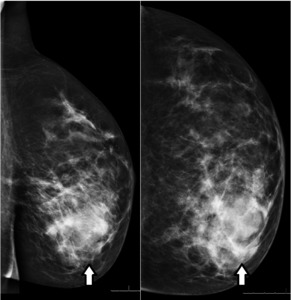 · The most common appearence is a mass (Fig. 3 and Fig. 4), which may present the following characteristics:

o Shape: round, oval or irregular.

o Echo pattern: it may appear hypoechoic or more frequently

· Second most common appearence is like a mixed echogenicity region without a mass, with or without posterior shadowing. 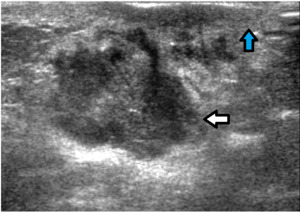 Fig. 3: Same patient in figure 1. Ultrasonography of the right breast demonstrate an irregular mass (white arrow) in the middle of the lower outer and inner quadrants with mixed echogenicity and not-circumscribed margins, without posterior shadowing. The mass contacts the skin (blue arrow), which is thickened.

Fig. 4: Same patient in figure 2. Ultrasonography of the left breast demonstrate an ovoid mass in the inner lower quadrant with peripheral hyperechogenicity and central hypogenicity, with non-circumscribed margins.

· MRI is a promising imaging technique that may guide us to the suspicion diagnosis of angiosarcoma.

· Heterogeneous mass is usually seen in MRI. Its imaging characteristics include: 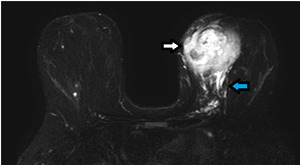 · On dynamic images after administration of intravenous contrast agent (Gadolinium) we can demonstrate prolonged enhancement (Fig. 6) due to retention of the agent of contrast in the vascular lakes and channels seen in histo-pathologic images. Also large draining vessels may be seen (Fig. 5).

Fig. 6: Same patient in figures 2, 4 and 5. MRI of both breasts, post-gadolinium T1/FFE sequence with substraction. We demonstrate a strong heterogeneous enhancement of the mass.

· Characteristics of enhancement of the mass depends on the histo-pathologic grade (% enhancement / time curves):