In total 44 Participants with suspected cognitive impairment were admitted to the neurologist and the Montreal Cognitive Assessment (MoCA)5 was carried out. Participants were divided into 3 groups:

MRI scans were performed on a 3T scanner.  Post-processing with cortical reconstruction and volumetric segmentation was performed with the Freesurfer image analysis suite, which is documented and freely available for download online (http://surfer.nmr.mgh.harvard.edu/).3, 4 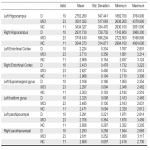 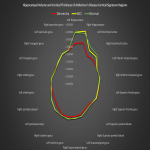