The adrenal gland can be visualized at obstetric US beyond 13 weeks of gestation, being large and globular. In neonates, adrenal gland on US shows differentiation between cortical and medulla, smooth undulations and characteristic shape of two legs [2]. 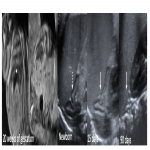 Fig 9: The adrenal gland can be visualized at obstetric US at 13 weeks of gestation,...
With child growing, corticomedullary differentiation diminishes by 6 months of age. Beyond this age, the visualization of adrenal glands on US may be difficult. Recognizing the normal shape of adrenal glands in neonates is important because sometimes a lesion does not appear as focal, but rather affects the gland diffusely, as it happens in congenital suprarenal hyperplasia. 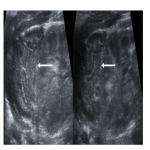 Fig 10: Newborn, 2 days after birth. Omphalocele and macroglossia on clinical...


The growing use of US for anatomical survey during gestation has led to increased antenatal detection of congenital adrenal masses during the 2nd and 3rd trimesters. Previously published series show that the vast majority of fetal masses are identified in the late second and third trimesters [3], which also reflected the experience in our series. US is the method of choice for diagnosis and follow-up [4]. MRI complements US in unclear diagnoses and detects further findings such as liver metastases in neuroblastoma. Both imaging techniques help guiding prenatal and postnatal management.

In adrenal lesions, the adrenal gland is not seen or is partially seen. They are usually diagnosed antenatally, in the third term.

Neuroblastoma is the most common adrenal neoplasm in the fetal period and the most frequent congenital malignancy. 20% of neuroblastoma are congenital, developed on the 3rd trimester, and 2/3 are located on the right side [1], concordant with our series. In most cases prognosis is good, often with follow-up needed to watch for spontaneous regression if favorable biological markers [4]. Expectant observation can be considered standard therapy if adrenal tumor measures less than 5 cm [6], if there is neither regional nor metastatic affection, and patient is younger than 90 days [7]. 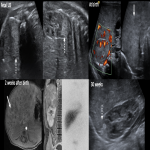 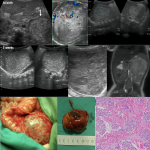 Fig 12: Newborn US showed an adrenal left solid mass (arrow) with vascularization on...

It has been described that 50% congenital neuroblastoma are cystic and 50% are solid (concordant with our series, where 50% were solid, 32% cystic, 18% mixed with cystic predominance) [1]. The cystic variant of congenital adrenal neuroblastoma has clinically significant characteristics such as decreased incidence of metastasis and lower tumor marker levels. CT and MR have low diagnostic value in its diagnosis [8], and they can resolve spontaneously. 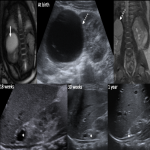 
Biopsy in cystic tumors is difficult and in our experience is not usually performed.

Cystic neuroblastoma can be difficult to differentiate from a mature adrenal hemorrhage. In our experience, neuroblastoma show a slower decrease in size than hemorrhages. If a mixed (solid and cystic) US pattern is identified, vascularization on Doppler study supports the diagnosis of neuroblastoma. 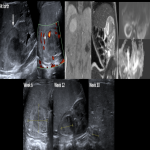 Fig 14: US of a newborn at birth, showing a mixed lesion (arrow) with cystic component...

Adrenal hemorrhage is the most common cause of an adrenal mass in a neonate, and it usually occurs in the first few days of life, as our series reflected. On literature it is described a predominance on the right side (70%), and 10% of cases are bilateral [2]. Nevertheless, on our series, 50% of cases were left. One limitation of our study was that not every adrenal hemorrhage was registered in the last 10 years, resulting in an underestimation of their real incidence and the interpretation of data.

It may be incidentally detected, more frequently if history of difficult delivery, sepsis, perinatal hypoxia, or trauma is present. If clinical symptoms are present, they are variable, including mass, jaundice, shock or anemia [2], which also were identified in our series.

Adrenal hemorrhage shows a variable appearance, as imaging evolves over time (echogenic mass, liquefaction, clot). With serial scanning, an adrenal hemorrhage will show cystic transformation and involution, and lately dystrophic calcifications. No internal flow is seen at color Doppler US. 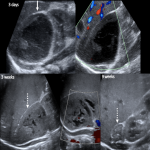 Fig 15: Newborn of 3 days of life after instrumental delivery and clavicle fracture....

There are some lesions in suprarenal area that do not arise from adrenal gland, and thus adrenal gland can be visualized and radiologists must try to identify it. MR may help to identify them.

These entities appear most frequently on second term of gestation.

Renal alterations such as superior caliceal dilatation (most frequently in duplex collecting system) or dysplasia have been described as a cystic lesion in suprarenal area [9], concordant to our series 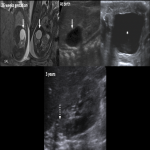 
On imaging, normal adrenal gland and small kidney may be seen, with a cystic lesion in the upper pole which can be associated to ureterocele.

Digestive pathology may be also considered in the differential diagnosis. The most frequent entity is gastric duplication cyst [10], as confirmed in our series. On US it is seen as a cystic lesion with digestive tube wall (typical echogenic inner mucosal layer and hypoechoic outer muscular layer). Surgical treatment is required. 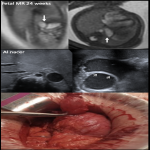 Pulmonary sequestration is a malformation in which a portion of lung is not in normal continuity with the tracheobronchial tree, and may derive its blood supply from systemic vessels. It can be intralobar (with shared pleura) and extralobar. Extralobar forms are uncommon and are separated from the lung with pleural covering. Among them, infra-diaphragmatic pulmonary sequestration is a rare type (10%). Diagnosis of intraabdominal pulmonary sequestration is difficult and is mostly diagnosed by histopathologic study of a surgically resected lesion. On imaging, lesions are homogeneous and more echogenic on US than neuroblastomas, triangular in shape, showing a systemic feeding artery [10,11]. 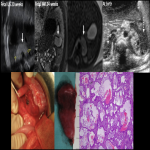 Fig 18: Fetal US at 20 weeks of gestation showed a solid hypoechoic lesion in left...

On literature they mostly appear on the left side [11], concordantly to our experience. 5 patients required surgical treatment, and one is being followed, as it has also been reported on literature [10].

In conclusion, congenital suprarenal lesions can arise from different organs and can be benign or malignant, and radiologist must know their main imaging features and differences to orientate their characterization and diagnosis. Our series was similar to those published on previous literature, showing an increased antenatal detection of congenital adrenal masses during the 2nd and 3rd trimesters performed by US and MR. 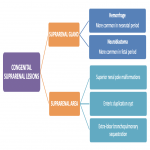 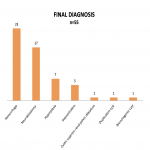 Fig 2: Distribution of final diagnosis confirmed by histological analysis (if... 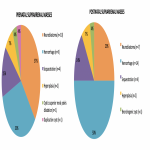 Fig 3: Distribution of diagnosis depending on patient's age. Most frequent diagnosis... 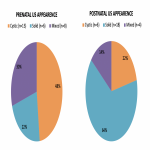 Fig 4: Ultrasound appearance varied depending on the diagnostic period. On prenatal US... 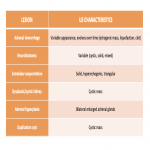 Fig 5: Different US characteristics were described. Depending on the diagnosis, the... 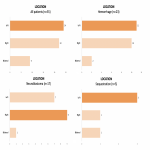 Fig 6: Location of the lesions showed similar frequency on both sides (left: n=24;... 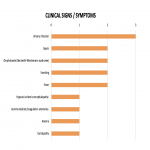 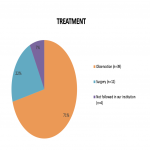 Fig 9: The adrenal gland can be visualized at obstetric US at 13 weeks of gestation,...

Fig 10: Newborn, 2 days after birth. Omphalocele and macroglossia on clinical...

Fig 12: Newborn US showed an adrenal left solid mass (arrow) with vascularization on...

Fig 14: US of a newborn at birth, showing a mixed lesion (arrow) with cystic component...

Fig 15: Newborn of 3 days of life after instrumental delivery and clavicle fracture....