Anatomy of the Prostate Gland

The prostate gland can be divided into three zones with distinct embryologic origins.

The peripheral zone (PZ) is the largest part of the prostatic gland in young adults. It is deficient anteriorly, in continuity with the anterior fibromuscular stroma. The PZ has a cup-like shape and can be distinguished on T2-weighted images by its high-signal intensity (greater than adjacent fat). On T1-weighted images, it has a homogeneous intermediate signal.

The prostatic morphologic changes that occur with age can be seen in Fig 1. 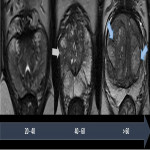 Fig 1: Timeline demonstrating the different physiologic aspects of the prostate on T2-...

The prostate gland is not delimitated by a true capsule, but by a pseudocapsule, consisting of fibromuscular tissue. It is arranged into three fascia layers which are sparser anteriorly and in the apex. It is depicted on T2-weighted images as a thin, low signal intensity rim that contours the prostate gland. The anterior fibromuscular stroma demonstrates low signal intensity in both T2 and T1-weighted images. (1)

The neurovascular bundles are an important landmark for surgery and there are several anatomic variants regarding its location. However, they are typically located posterior and laterally at 5 and 7 o’clock, at a distance of about 3 mm from the capsule, branching to the apex and base. 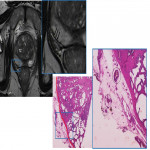 The staging of PCa is determining in the treatment choice, as different options are available whether the disease is organ-confined or is local or distant disseminated. Locally advanced disease refers to ECE, seminal vesicle invasion or involvement of other pelvic structures. (3)

Despite its high specificity, MRI has lower sensitivity in the detection of ECE. (4) The detection of ECE on MRI currently relies on the visualization of its subjective findings, secondary to macroscopic extension and its mechanical consequences. (5) These findings are different according to the aggressivity of the tumor and the degree of ECE. On MRI, features that suggest ECE can be divided into early and late findings of ECE (Figs. 3 and 4). These criteria are based on a chronological concept of cancer growth from truly intraprostatic to truly extraprostatic, in accordance with established histopathologic criteria for ECE. 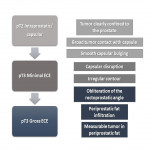 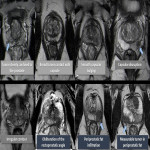 Fig 4: Schematic representation of the findings that suggest prostatic cancer...

The early findings are:

As the tumor grows under the capsule, tumoral glands form perceptible deposits that can be seen on MRI as late findings, which include:

The late findings have a higher predictive positive value for EPE and its assessment has a higher reproducibility since they are more conspicuous than the early findings. (6) 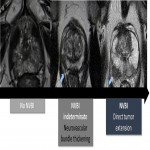 Fig 5: Representation of the findings of neurovascular bundle invasion (NVBI) on...

At pathology, the evaluation of pECE can be challenging, as the prostate lacks a true capsule and its boundaries are not easily defined, especially at the level of the apex and at the anterior aspect of the gland. The pseudocapsule consists of organized layers of condensed smooth muscle (Fig. 6) that may be intermixed with the prostatic stroma and, thus, may be hard to be correctly delineated. (2) 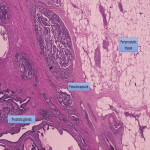 Fig 6: Histological analysis from a prostatectomy specimen shows the pseudocapsule,...

At the apex, the prostatic tissue is mixed with skeletal muscle from the urogenital diaphragm but, if tumoral cells are seen within skeletal muscle, it does not necessarily mean ECE. According to the International Society of Urological Pathology (ISUP) consensus (7), there are no definitive criteria to define ECE at the prostatic apex.

Likewise, at the anterior part, the prostatic boundaries are also imprecise, with glandular stroma admixed with fibromuscular tissue from the urogenital diaphragm. However, at that level, ECE is defined by the presence of tumoral glands outside the contour of the normal prostatic tissue. (7)

The diagnosis of pECE implies the presence of one of the following criteria:

The degree of ECE can be then divided into focal or extensive. Focal extension is present if the tumoral glands do not occupy more than one high-power field on no more than two separate histopathological sections, whereas it is defined as extensive if the extension is superior to the stated. (8) 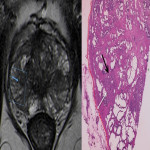 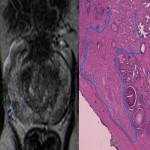 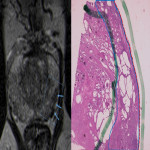 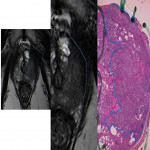 Fig 10: T2-WI MR images with zoom out and in, reveal a low signal intensity left lesion... 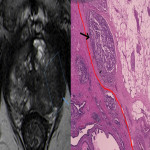 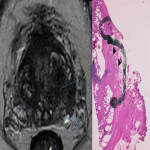 Fig 1: Timeline demonstrating the different physiologic aspects of the prostate on T2-...

Fig 4: Schematic representation of the findings that suggest prostatic cancer...

Fig 5: Representation of the findings of neurovascular bundle invasion (NVBI) on...

Fig 6: Histological analysis from a prostatectomy specimen shows the pseudocapsule,...

Fig 10: T2-WI MR images with zoom out and in, reveal a low signal intensity left lesion...