MRI characteristics of intraosseous lesions of the patella

Fig. 1: There is a poorly-defined destructive lesion involving the patella, which is... 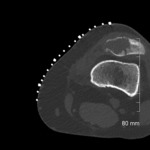 Fig. 2: Patellar lesion with mild permeation and destruction of the cortex, no... 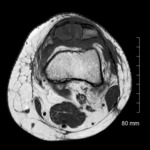 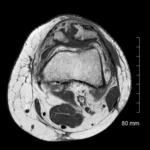 Fig. 5: There is a poorly-defined lytic lesion involving the medial half of the...

Fig. 6: Poorly-defined lytic lesion involving the medial half of the patella. The knee... 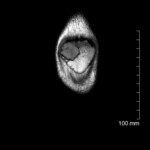 Fig. 7: Lobulated intraosseous lesion which is mildly hyperintense on T1-weighted... 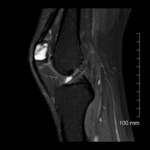 Fig. 8: Several fluid-fluid levels at the medial aspect of the lesion. Chondroblastoma

Fig. 9: There is ill-defined focus of bone destruction in the medial aspect of the... 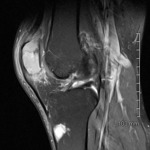 Fig. 10: There are small lobules of abnormal signal suggesting tumour in the adjacent...

Fig. 11: There is a well-defined lytic lesion present in the lateral aspect of the... 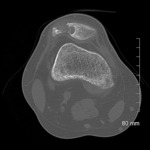 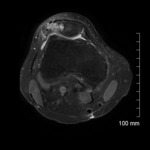 Fig. 13: The lesion present in the patella demonstrates a slightly bright signal... 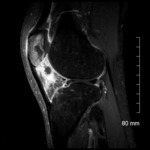 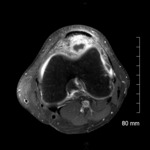 Fig. 15: Enhancing inflammatory tissue is seen in the superior aspect of the fat pad... 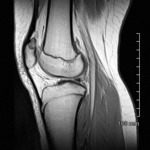 Fig. 17: T1-weighted sagittal image shows a well-circumscribed defect in the... 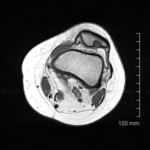 All cases of tumours and tumour-like lesions of the patella diagnosed in the department of Radiology at the Royal National Orthopaedic Hospital between 2008 and 2015 were reviewed.

The clinical and surgical records, radiological findings and histopatholgy of 10 cases with 11 patellar lesions were reviewed.

There were 5 male and 5 female patients with age range 14 to 68 years. The presenting symptom was knee pain in all cases.

It is the most common type of diagnosed patellar tumours (33% of all the patellar tumours). GCT has a peak incidence in the third or fourth decade of life. Patients present with non-specific knee pain and /or swelling. Plain radiographs demonstrate an osteolytic lesion with faded boundaries. CT findings include an intraosseous lytic lesion with cortical thinning or cortical erosion and joint effusion. Pathological fracture may be found. On MRI, the lesion shows higher signal intensity compared to skeletal muscle onT1-weighted sequences and heterogenous signal intensity on T2-weighted spectral presaturation with inversion recovery sequences. Contrast-enhanced fat-suppressed T1-weighted sequences demonstrate heterogenous strong enhancement of the lesion. There was no obvious soft tissue or intra-articular extension. An incisional biopsy was performed and histopathological diagnosis of GCT was made.  The surgical treatment for small benign patellar GCT includes curettage with bone graft and partial patellectomy. Total patellectomy has been recommended as the preferred treatment for aggressive GCT of the patella.

It is the second most common benign patellar tumour (16% of all the patellar tumours). Patients present with knee pain and/or swelling. Plain radiographs demonstrate a radiolucent lesion with well-defined sclerotic margin. Pathological fracture may be present. MRI shows the lesion as low to intermediate signal on T1-weighted sequences and intermediate to high signal on T2-weighted sequences. Appearances are of a lobulated lesion within an expanded patella with a low-signal intensity rim; fluid-fluid levels may occasionally be seen. Low signal intensity foci within the tumour corresponding to calcification seen on plain radiographs or CT may be seen. Bone marrow oedema is present in majority of cases, for which STIR sequence is of particular value. The recommended treatment is curettage and bone grafting. If large or recurrent patellectomy is indicated.

We had one case of a malignant patellar tumour which was histologically proven to be a lymphoma. Plain radiographs show a well-defined radiolucent lesion or moth-eaten appearance and multiple lytic lesions. Pathological fracture may be present. MRI shows a marrow-replacing lesion with heterogenous and mostly hypointense signal intensity on T1-weighted sequences, heterogenous and mostly hyperintense signal on T2-weighted sequences. Heterogenous enhancement and peri-lesional oedema and soft-tissue extension may be seen. The common treatment includes a combination of chemotherapy and radiotherapy, chemotherapy alone and radiotherapy alone.

Various tumour-like conditions that mimic tumours have been described including osteomyelitis, brown tumour of hyperparathyroidism, gout, tuberculosis and Paget's disease.

In our series, there were six non-neoplastic conditions (one gout, one tuberculosis, three dorsal defects and one rheumatoid disease).

The knee is the third most frequent skeletal locations for tuberculosis. Knee tuberculosis mainly involves the synovium with local extension eroding the bone. Patellar tuberculosis is rare. Plain radiographs may show lytic area with sclerotic borders, sequestrum may be present as a density. MRI detects intraosseous lucency with central calcific densities, suggesting chronic osteomyelitis with sequestrum. early bone marrow oedema and soft tissue abnormalities. Diagnosis is usually confirmed by histology and bacteriology. Treatment is based on multiple antibiotherapy.

Dorsal defect of the patella

A characteristic lytic patellar lesion, the dorsal defect is a variant related to normal ossification. It usually is an incidental radiographic finding but occasionally may be symptomatic with knee pain. Dorsal defect of the patella presents in 0.3 to 1% of the population. On plain radiographs, dorsal patellar defect is a round, radiolucent lesion surrounded by a zone of sclerosis located on the superolateral aspect of the dorsal surface of the patella. MR shows a hemispherical defect in the deep cortical surface of the patella with intact overlying cartilage that thickens to fill the defect. It demonstrates low signal on T1 and high signal on T2 images. The location, radiographic appearance and clinical course are unique, distinguishing it from other lesions of the patella. It should not undergo biopsy.