Fig. 4: Alignment and positioning: A –Vertical center of rotation B –Horizontal...

Fig. 10: Evidence of abnormal lucencies, more pronounced at zone 3 and 5 of Gruen and...

Acetabular and femoral prosthetic components should mimic normal radiographic anatomy.
It is important to perform an initial evaluation to use as reference for comparison in serial studies.

Alignment and positioning, periprosthetic radiolucencies, bone remodeling and component migration should always be assessed. Charnley and Gruens zones present an anatomic division to report the location of lucent areas.

A - Vertical center of rotation of the acetabular head:  Vertical distance between the center of the femoral head and the transischial tuberosity line should be equal bilaterally. Fig. 4

C - Lateral acetabular inclination: Angle between the transischial line and a line drawn across the superior and inferior acetabular rims (Normal values between 30-50º). Lesser angulations result in limited abduction and greater predispose to dislocation. Fig. 4

E - Leg length discrepancy: Distance of the top of each lesser trochanter to the transischial line is used as reference. Well tolerated up to 1cm of discrepancy. Fig. 4

F - Position of the femoral stem - The femoral stem positioning should be aligned with the longitudinal axis of the shaft. Varus malpositioning (distal tip against the lateral cortex) increases the risk of failure. Fig. 4 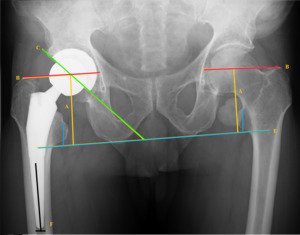 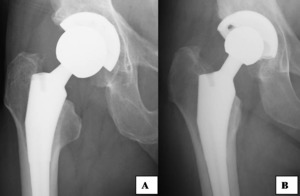 Periprosthetic radiolucencies may be normal or a sign of loosening.  These findings differ between cemented and non-cemented prosthesis.

Charnley and Gruens zones present an anatomic division to report the location of lucent areas.

Acetabular lucency in zone I is common, but not it shouldn´t be seen in zone II or III.

Femoral lucency in zone 1 is common, and also occasionally in zone 7, but it shouldn´t be seen in zones 2-6. Fig. 10 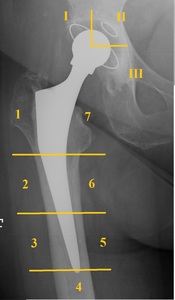 Fig. 9: Charnley zones - around the Acetabulum– 3 zones (I-superior, II - middle and III -inferior thirds of the acetabulum). Gruen zones - Around the femoral stem – 1-7 zones, starting from the lateral aspect and progressing anticlockwise. Zone 1 and zone 7 are around the greater and lesser trochanters, respectively and zone 4 is around the distal prosthesic tip.

These changes imply stability of the prosthesis and occur within the first 2 years after surgery.

Within the first 2 years, it may be normal that some types of prostheses subside around 1-2mm. Progressive movement after 2 years or more that 10mm is not normal.

The most common complications are loosening, periprosthetic fractures and infection.

Some complications may have similar imaging findings and overlap exists. Radiographic follow up and comparison with oldest films is the most important method for detecting complications.

Fractures can occur during surgery or months or years later. They are more frequent with non-cemented prosthesis intraoperativelly and on the femoral side.

Cerclage cables may be needed to stabilize the fracture.

Vancouver classification of periprosthetic femoral fractures after THA has been modified to include intraoperative fractures. Type A are located at the trochanteric region, Type B around or just distal to femoral stem and Type C well below the stem. 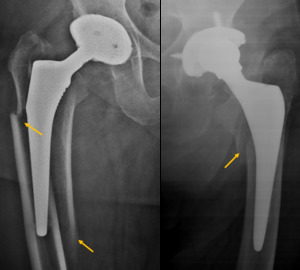 More common as an early postoperative complication but it can also occur later.

Dislocation can occur either in posterior, anterior or lateral direction at any of the components (acetabular cup, femoral stem or femoral head out of the cup).

Eccentric position of femoral head within the acetabular cup is a sign of polyethylene wear and predisposes to dislocation.

It may be due to patient factors (poor muscle tone or trauma) or surgical factors (posterior surgical approach, inappropriate angulation of the acetabular component, small head size). 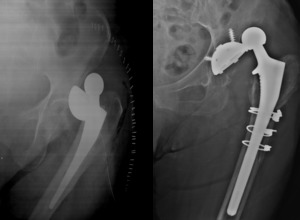 Early infections (up to one year after surgery) are usually related to the surgical procedure.

Late infections may be due to haematological seeding from dental, respiratory or urinary infections.

Infection can be difficult to detect with imaging and radiographic findings may include:

Infection is more frequent in patients with diabetes and rheumatoid arthritis.

Intraoperative perforation of acetabulum may occur during preparation of acetabular cup placement and the defect may be filled with cement, bone transplant or bone fragments. This is usually asymptomatic but rare complications may develop. 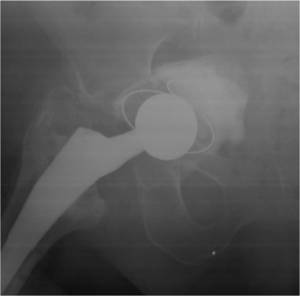 It is well tolerated up to 1cm discrepancy but greater differences may cause limping and pain.

There are several intraoperative limb length measurements, usually based on the distance between 2 reference points in the pelvis and femur (greater or lesser trochanter to the transischial line can be used as reference). 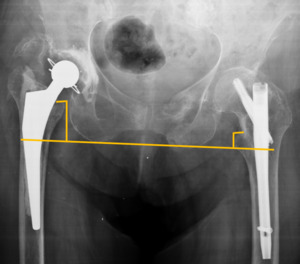 It is a macrophage-induced inflammatory response that results in peri-prosthetic bone loss.

Criteria for diagnosing loosening of either femoral or acetabular components are not well defined, but several features suggest the diagnosis:

Loosening predisposes to dislocation and fractures. Thus, to diagnose loosening is important to compare current radiographs with previous ones. 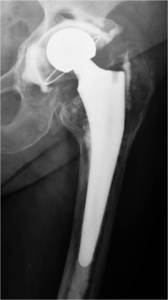 Fig. 10: Evidence of abnormal lucencies, more pronounced at zone 3 and 5 of Gruen and zone III of Charnley.

Results of local mechanical damage by friction of components, with loss of material and generation of wear particles. It often coexists with particle disease.

Abnormal loads on the lateral side result in polyethylene wear, which appears as asymmetric positioning of the femoral head within the acetabular cup.

Superiorly located femoral head, even slightly, is not normal. Fig. 15

Consists of a hystiocytic  response to anyof the prosthetis components, as a reaction to small plyethylene wear particles. It is more frequently seen in non-cemented hips.

Radiographic evidence of wear may not be evident. Focal radiolucencies around the prosthesis are the main presentation. Other features include smooth endosteal scalloping and no sclerotic reaction. It may be difficult to distinguish particle disease form low grade infection, but the first produces no secondary bone response.

It can appear between 1-5 years after surgery and slow but steady progression of the lytic lesions may lead to loosening, fracture and destruction of the bone. 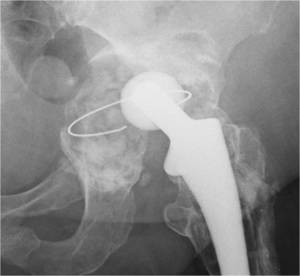 Fig. 15: Particle disease. Exuberant acetabular osteolysis leading to acetabular protusion in a cemented THA. Notice the eccentric position of the femoral head at the acetabulum, a sign of polyethylene wear. 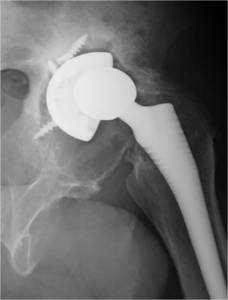 Fig. 16: Particle disease. Acetabular osteolysis leading to screw dislocation in a non-cemented. Notice the eccentric position of the femoral head at the acetabulum, a sign of polyethylene wear.

It may occur when mesenchymal cells in the surrounding soft tissues are transformed into osteoblastic cells, producing lamellar bone.

Most typical locations are around the femoral neck and adjacent to the greater trochanter.

Classification of extent of bone formation  (AP radiograph of the pelvis):

The symptoms may range from asymptomatic to hip stiffness. There is a higher risk of heterotopic ossification in patiens with ankylosing spondylitis, diffuse idiopathic skeletal hyperostosis (DISH) and hypertrophic osteoarthritis. 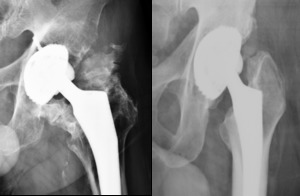