Fig. 5: Bone destruction secondary to infection anterior to the tip of distal femur.

Fig. 16: Brooker grade 2 heterotropic ossification on the left side and grade 4 on the...

Fig. 7: There is periprosthetic fracture in the region of the trochanters in keeping...

Fig. 8: There is periprosthetic fracture in the region of the trochanters in keeping...

Fig. 10: There is periprosthetic fracture in the region of the femoral stem in keeping...

Fig. 18: Metastases are not infrequent after hip arthroplasty as seen in this case in... 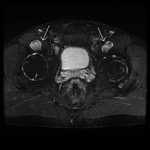 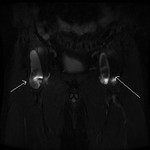 Fig. 12: There is dislocation of the acetabular cup of the right THR- AP view

Fig. 11: There is periprosthetic fracture in the region of the femoral stem in keeping...

Fig. 13: There is dislocation of the acetabular cup of the right THR- Lateral view

Plain radiograph is the investigation of choice and  often occurs in the immediate post op period due to haematoma or a few years after the surgery due to wear of implant.

Second most common cause of morbidity and revision accounts for 19.7% of revision procedures. The contributing factors include wear of prosthetic components, poor initial position of implant and failure of fixation. It is clinically associated with pain and discomfort. Plain radiograph and CT supersede MRI in assessment of loosening. The radiological features are

Infection is the third most common cause that contributes to 14.8% of all revisions hip arthroplasties. Infection can occur either early in the post operative period or present late in case of low grade infection. Ultrasound is useful in assessment of collections or  hip joint effusion. Plain radiographs and CT are once again play the main role in diagnosis with loosening

·         Infection can produce either pattern of radiolucency, Uniform/ Multifocal.

·         Arthrocentesis and synovial biopsy may be required to confirm the diagnosis in low grade infections.

·         US guided aspiration and periarticular fluid assessment may be required.

In rare circumstances, the metallic hardware can give way resulting in fracture of the femoral stem, dissociation of the modular femoral component and fracture of acetabular liner, which is more common with ceramic liners. Wear of the poly liner is a common long term sequale/complication presenting with dislocation.

Heterotropic ossification is seen in 15%-50% of patients after the hip arthroplasty. Patients typically present with hip stiffness. Detectable calcification density can be seen on radiographs and CT within weeks after surgery and ankylosis seen as early as 12 weeks after the surgery. A three phase bone scan is more sensitive and can be positive 4-6 weeks prior to calcification detected on plain radiograph or CT. incipient HO can be detected on blood pool images as early as 2.5 weks after injury and the delayed phase become positive a week later.
Surgical excision is considered after maturation of HO and serial pre-operative bone scan can help quantify ratio of heterotropic to normal bone activity to avoid delay and subsequent risk of ankylosis.
Brooker classification is used for grading HO. Grade 1 represent island of bone in soft tissue. Grade 2 includes bone spur that arise from pelvis or proximal femur leaving >1cm between the opposing surfaces. Grade 3 is similar to grade 2 but < 1cm between the opposing surfaces, whereas, grade 4 is complete ankylosis.

Pseudobursae are irregular recesses that communicate with the joint and are typically detected at arthrography or cross sectional imaging. Inflammation of the bursae can also be seen post hip arthroplasty due to altered dynamics of the joint.