Axial spondyloarthritis – the role of imaging in diagnosis and management

Fig. 4: Anatomy of the intervertebral disk (left) and major ligaments of the spine...

Fig. 14: Radiographic changes and their respective score in mSASSS evaluation.

Fig. 10: Paget disease - MRI depicts heterogeneity of the trabecular pattern of the...

Spondyloarthropaties are a group of chronic inflammatory disorders that affect the musculoskeletal system and share several common features, such as familial clustering and high frequency of HLA-B27 positivity. Spondyloarthritis (SpA) affects men more frequently than women and the disease usually starts in the second to forth decade. These disorders comprise:

Clinical presentation is variable, but is characterized by inflammatory involvement of the entheses, which are juncitonal areas between bone and tendons, ligaments, capsules or fascia. Enthesopathy is a major feature in such patients, and may affect the axial and peripheral skeleton. Both synovial ans fibrous joints are frequently affected.

Early diagnosis is critical for establishing a proper therapy that halts the natural progression of the disease and clinical evaluation requires complementary radiological information through a combination of techniques (radiography, computed tomography and MRI play an essential role for axial SpA).

The joints and disease manifestation

Axial SpA comprises the following joints - discovertebral (peripheral); zygoapophyseal / facet; costo-vertebral and costo-transverse; sacro-iliac. The major axial spondyloarthropaties have distinct patterns of injury of these joints, as described below in Fig. .

Furthermore, the ligaments surrounding and stabilizing these joints are also affected at the enthesis, where inflammation takes place. Enthesitis promotes early-phase erosions of bone (due to high turnover) and later sclerosis (reactive osteitis). Late-stage SpA is characterized by ligament, tendon and capsule ossification with development of bone bridging and ankylosis of such joints.

The sacro-iliac joint can be separated into a posterior ligamentous portion (that functions as a syndemosis), and an anterior synovial portion, covered with articular cartilage. The cartilage is thicker on the sacral side and, thus, less prone to lesions than the iliac side. 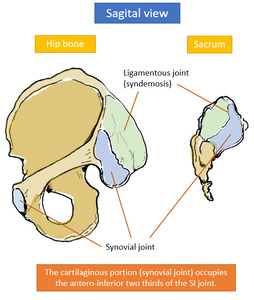 The following ligaments of the sacro-iliac joint are affected in SpA:

Because the sacroiliac joints are predominantly made of fibrous connective tissues (fibrocartilage) and contain very little synovial fluid, they may be considered entheses. This may explain why they are generally spared in Rheumatoid Arthritis (RA) and their characteristic involvement during SpA. 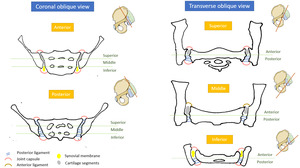 The inter-vertebral disk is comprised of an inner core - the nucleus pulposus - and an outer fibrous ring - the annulus fibrosus. There is also a cartilage lining on the superior and inferior vertebral plates that protects the corresponding subchondral bone. The inner core is generally spared (except in later stages of SpA), but the annulus fibrosus attaches to the periphery of the vertebral plates, where there is no protecting cartilage, and interweaves with the anterior and posterior longitudinal ligaments, working as an enthesis.

Also, there are several ligaments stabilising the spine which are prone to inflammation at their point of insertion with bone: 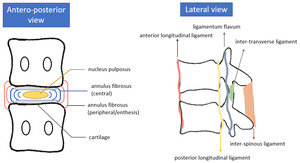 Fig. 4: Anatomy of the intervertebral disk (left) and major ligaments of the spine (right). The peripheral segments of the annulus fibrosus function as an enthesis at the point of insertion on the outer ring of the vertebral plates.

Reactive sclerosis leads to the formation of sclerotic corners adjacent to the enthesis and, in later-stages, ossification of ligaments, tendons and capsules of the affected joints.

Fig. 5: Spine spondyloarthritis progression from acute inflammation to chronic changes. MRI depicts early-stage lesions, but is not as good as CT and radiography to determine chronic structural changes.

Radiographs of the spine have been selected by the International Assessment in Ankylosing Spondylitis (ASAS) Working Group as an important outcome domain in clinical trials. It is the method of choice in the primary evaluation and follow-up of patients with sacroiliitis and plays an essential role in demonstrating chronic changes of the spine. 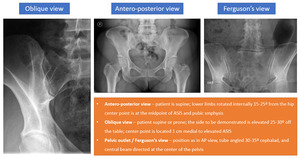 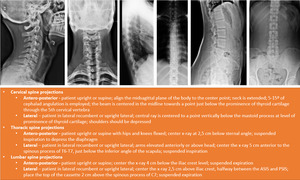 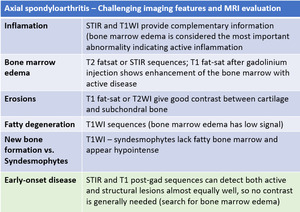 The main differential diagnosis for spondyloarthropathies is the presence of a septic sacroiliitis or spondylodiskitis, which are uncommon and more frequent in children and young adults.

Sacroiliac infections arise most often from blood-borne pathogens; erosions of the sacroiliac joints may be seen associated with osteomyelitis or soft-tissue abscess. Joint aspiration is often necessary for diagnosis. Juxta-articular bone demineralization, considered the earliest finding of infectious sacroiliitis, can be seen on CT. Soft tissue involvement and unilaterality also help in diagnosis.

Another differential diagnosis that should be taken into account when in the presence of a spondyloarthropathy is between rheumatoid arthritis and seronegative spondyloarthropathies. Afection of the SI joint in RA is bilateral and symmetric, with distension of the joint and bursa, joint space narrwoing and protrusio acetabuli.

Other differential diagnoses are described below: 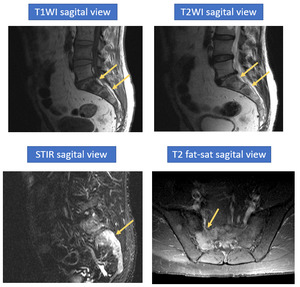 Fig. 10: Paget disease - MRI depicts heterogeneity of the trabecular pattern of the sacrum, with areas of sclerosis (low-signal on all sequences) and rarefaction with bone marrow edema (high on T2WI and STIR sequences).

Imaging is an important tool in diagnostic evaluation of the sacroiliac joint and spine. Decision on which technique to perform should be based on disease duration, suspicion for inflammatory activity or infectious disease, and patient age.

There are several classification criteria for SpA that have been established through the years, such as the Modified New York Criteria, Armor criteria, ESSG criteria, ASAS axial SpA criteria. they all focus predominantly on AS and have specific strengths and weaknesses. We will focus on the ones that are more consensual in state-of-the-art literature.

In Ankylosing Spondylitis (AS), sacro-iliitis is the most common primary manifestation, followed by dorso-lumbar disease and, ultimately, cervical spondylitis. In fact, chronic changes of the spine, especially syndesmophytes, are not part of current diagnostic criteria for AS because the disease nearly always starts in the SI joints; presence of syndesmophytes in radiographically normal SI joints is rare.

The most widely used criteria for classification of AS is the Modified New York Criteria, however it lacks sensibility for early-phase SpA as it focus too much on structural damage of the axial skeleton. 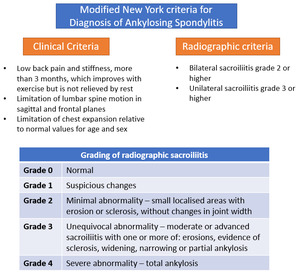 The ASAS axial SpA criteria recognizes the existence of a non-radiographic stage in early AS and the limitations of the existing classification criteria highlighted the need to develop new criteria sets. The ASAS criteria attempt to cover clinical manifestations, family history, imaging and laboratory analyses. It consists of an “imaging” arm and a “clinical” arm. They both require that the patients has chronic back pain before the age of 45 years and persists for >= 3 months.

If the criteria for the clinical arm are met, sacroiliiitis is not mandatory for fulfillment of the ASAS asSpA criteria. 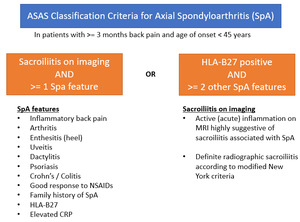 The European League Against Rheumatism (EULAR) has developed recommendations for diagnosis and management of axial spondyloarthrosis in clinical practice. Below are the main indications for diagnosis, monitoring disease activity, monitoring strucural changes, predicting outcomes and severity and treatment effect.

Furthermore, indications are given for patients with suspected spinal fractures and osteoporosis, which go beyond the scope of this presentation.

The prefered method for scoring chronic changes of the spine in clinical studies is currently the Modified Stoke Ankylosing Spondylitis Spine Score (mSASSS), which investigates only lateral views of the cervical and lumbar spine and scores for corner erosions, sclerosis,syndesmophytes and bone bridging. It showed better reproducibility both intra and inter-observer and better sensitivity to change than its main alternative method, the Radiographic AS Spinal Score (RASSS). 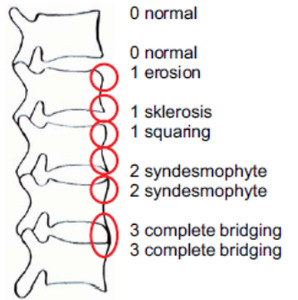 While RASSS evaluates the cervical, throacic and lumbar column, it is more subject to interpretation errors than mSASSS, it has higher costs and exposure to radiation that did not reveal  a significant benefit.

Furthermore, not every lumbar x-ray includes the inferior thoracic vertebra, which precludes comparison with previous examinations when assessing for disease progression in a patient that has not been systematically followed according to this score. 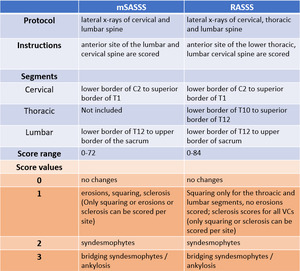 The BASRI-spine method suffers from a substantial ceiling effect when compared with mSASSS and it is insensitive for minor radiological changes, but can also be used for quantification of disease progression in AS. For evaluation of the sacro-iliac joints, the New York criteria for sacroiliitis can be integrated in BASRI by establishing the mean score of both SI joints (0-4). 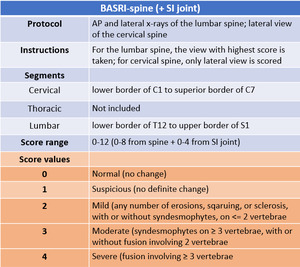 Concerning acute inflammation of the spine and sacro-iliac joint, several semi-quantitative methods have been developed for MRI evaluation. According to the ASAS/OMERACT MRI working group, the Spondyloarthritis Research Consortium of Canada scoring system has whon better results than the remaining, more condensed, systems.

Below is a symplified protocol for the SPARCC-Spine and SPARCC-SI joint indexes, which can be employed using STIR sequences for best depiction of "bone marrow edema".