Normal MR imaging appearance of the intrinsic muscles of the hand is not different from the appearance of other skeletal muscles. On non fat suppressed T1, T2 and intermediate weighted MR images, muscles are typically intermediate intense compared with the hyperintense signal of fat or the hypointense signal of cortical bone.  On fat suppressed T1, T2 and intermediate weighted images, muscles typically appear hypointense as compared to cartilage or joint fluid on T2 weighted sequences.

Other than at larger extremities as for example the thigh, the frequent lack of intercalated fat layers makes it more difficult to discriminate the individual muscles of the hand from each other, especially for the hypothenar and thenar muscles, where partial volume artifacts due to the oblique course of the muscles impede muscle discrimination additionally. Because of the small size of the intrinisic muscles of the hand, high resolution imaging is needed for correct assessment, preferredly with an in-plane resolution of 0.5 to 1.0 mm and a slice thickness equal or smaller than 3 mm. 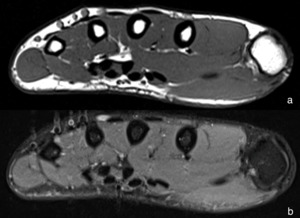 Fig. 1: Axial intermediate weighted MR images of normal appearing intrinsic muscles of the hand without (a) and with (b) fat suppression.

The intrinsic muscles comprise the thenar and hypothenar muscles (Fig. 2, Fig. 3), which control the motion of the thumb and little finger, respectiveley. The interosseous (Fig. 4, Fig. 5) and lumbrical muscles are also part of the intrinsic muscles and exert their effect on almost all fingers of the hand. 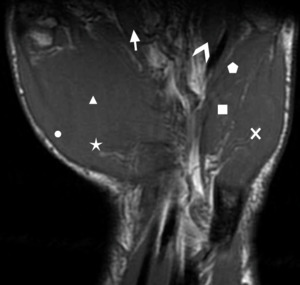 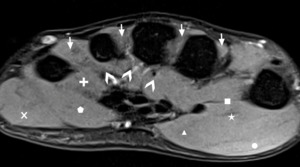 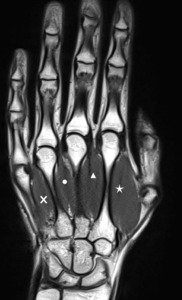 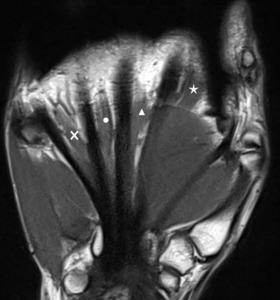 Because of natural variation in normal volume of the intrinsic muscles of the hand, contralateral imaging can sometimes help to judge the amount of atrophy if no other signs of disease are present.

The presumably most common anatomical variation in the muscles of the hand is an Accessory Abdcutor Digiti Minimi Muscle (Fig. 10, Fig. 16), which arises from the flexor retinaculum and inserts at the ulnar-sided base of the proximal phalanx of the little finger together with the normal abdcutor digiti minimi muscle. It is observed in up to 25% of individuals and hence not very surprisingly is asymptomatic in most of the cases. But just as other accessory muscles, it may cause compression of surrounding tissue (particullary the ulnar nerve) and ocassionally causing symptoms in select cases. It serves as an additonal abductor of the little finger.

The Extensor Digitorum Brevis Manus Muscle (Fig. 11) is a rather uncommon accessory muscle of the hand and is reported to be present in up to 3% of individuals. It might be uni- or bilateral and originates from the posterior radiocarpal ligament and distal radius. It most commonly inserts on the extensor hood of the index finger, but other insertions have been reported as well. It serves as an additional extensor of the finger. 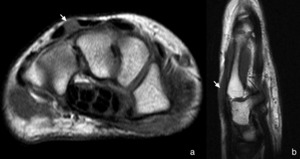 Fig. 11: Axial T1 weighted (a) and sagittal T2 weighted (b) MR images show extensor digitorum brevis manus muscle lying between the extensor tendons of the middle and ring finger. Extensor digitorum brevis manus muscle is an anatomical variant which is more often observed at the ulnar side of the extensor tendon of the index finger, but as also illustrated with this case, shows some variations itself. 13 years old patient was asymptomatic but concerned about the swelling at the back of his wrist.
References: RIWAG Radiologisches Institut Weinfelden AG - Weinfelden/CH

Several other anatomical variations as for example accessory lumbrical muscles, alternative originis of the lumbrical muscles, absence of flexor or abductor digiti minimi muscle have been described in the literature and can not be covered in details in this poster. Except for causing confusing, they usually are asymptomatic and if exerting deleterious effects, it is usually due to compression of other anatomic structures (especially in regions with limited space, as for example in the carpal tunnel). Other than variation in muscle anatomy itself, there might also occur some variation in innervation patterns of the intrinsic muscle of the hand.

Like other muscles of the body, the intrinsic muscles of the hand can be harmed during trauma to the hand. Injury usually occurs in conjunction with other osseous, ligamentary and/or tendinous defects and oftentimes will be overlooked because of other prominent findings.

The spectrum encompases the typical features of acute Strains (linear and streaky T2 hyperintense signal changes) (Fig. 12) and complete (discontinuity) or incomplete (partial discontinuity, volume loss and wavy course) Ruptures (Fig. 13), which might occur within the muscle substance, myotendinous junction or at the tendon itself. Chronic stages of disease are marked with hypointense scar tissue on T2 weighted MR images, if restitutio ad integrum did not occur. Atrophy or fatty infiltration may also be present in chronic stages after muscle strain. Fatty infiltration may be graded according to the Goutallier grading system. 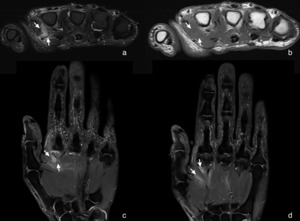 Fig. 12: Axial fat suppressed intermediate weighted (a), axial T1 weighted (b) and coronal fat suppressed intermediate weighted (c, d) MR images show streaky alterations (arrows) within the 1st dorsal interosseous muscle, which proof to be hyperintense only on fluid sensitive sequences (a, c, d) as compared to the hypointense appearence on the T1 weighted sequence (b). Signal abnormalities are consistent with muscle strain in a 61 years old patient who reported a hyperextension trauma.
References: Radiologie am Bahnhof AG - Frauenfeld/CH

Fig. 13: Coronal fat suppressed intermediate weighted MR image with partial ruptur (arrow) of the 1st dorsal interosseus muscle (asterix) at the myotendinous junction in a 52 years old patient after falling down the stairs. There is accompanying hyperintense muscle edema and wavy course of the myotendinous junction. Intact tendon insertion at the radial sided extensor expansion of the proximal phalanx of the index finger can be appreciated as well.
References: Institut für Radiologie, Kantonsspital Münsterlingen - Münsterlingen/CH

Little is known about exercise-induced signal changes in the MR of the intrinsic muscles of the hand. Although it is known that (excessively) exercised muscle may show a hyperintense signal on T2 weighted MR images compared with non-exercised muscle, the phenomen of Chronic Exertional Compartment Syndrome and the like have hardly been described for the intrinsic muscles of the hand. However, future research with advanced imaging techniques like MR spectroscopy, T2*-imaging, arterial spin labeling, as well as diffusion weighted and perfusion imaging may establish if some not yet completly understood signal changes should be attributed to exercise in certain cases (Fig. 14). 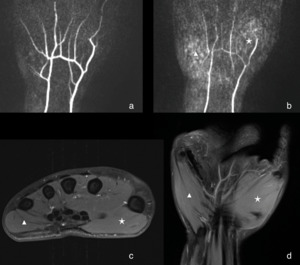 The intrinsic muscles of the hand are principally innervated from the ulnar and median nerve and hence susceptible to all diseases which might harm these two nerves. Chronic injuries due to repetitive trauma or compression (Fig. 15) are quite frequent, especially in areas of limited space like Guyon's canal and the carpal tunnel, but also acute injury from trauma might disturb normal nerval function and hence cause Muscle Denervation.

Muscle denervation in acute stages causes hyperintense neurogenic edema on T2 weighted MR images, which can be appreciated within the first days of the causing event. 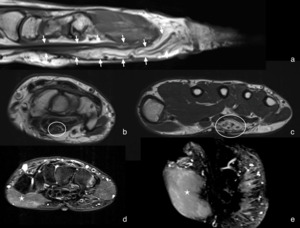 With more longestanding denervation, atrophy and fatty replacement of the intrinsic muscles of the hand can be shown in chronic stages of disease. Fatty replacement (Fig. 16) can be graded according to the Goutallier grading system and serves as a prognostic factor for muscle healing potential like for the other skeletal muscles of the body. 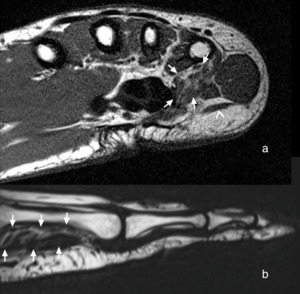 Fig. 16: Axial T1 weighted (a) and sagittal intermediate weighted (b) MR images show fatty infiltration (Goutallier Grade 2-3) of opponens digiti minimi muscle (between arrows). No further investigations for upstream ulnar nerve pathology were attempted since significance of findings was doubtable because 55 years old patient complained only of crepitations at the fourth and fifth extensor tendons. As another incidental finding, accessory abductor digiti minimi muscle (arrowhead) can be appreciated, as in up to 25% individuals of the normal population.
References: Institut für Radiologie, Kantonsspital Münsterlingen - Münsterlingen/CH

Because of the innervation pattern of the intrinsic muscles and the course of the median and ulnar nerve, neurogenic edema, atrophy or fatty infiltration of the thenar muscles typically is sign of compression of the median nerve in Carpal Tunnel Syndrome. Likewise, changes of the hypothenar and interosseous muscles are typically suspect for compression of the ulnar nerve in Guyon's canal.

Myositis may be caused by infection due to skin injuries or sepsis. Although imaging features of infection are non-specific, fluid collections and involvement of surrounding tissues should raise suspicion for an infectious origin of disease. Other causes for myositis include injury, autoimmune conditions (Fig. 17), drug side effects, idiopathic disorders and (as a secondary manifestation) other inflammatory diseases (Fig. 18). 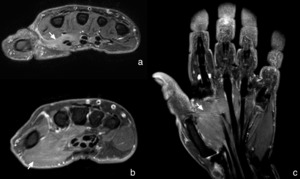 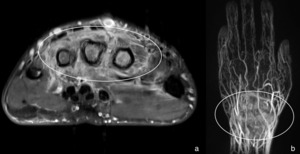 Complications of myositis include abscesses, hemorrhage, compartment syndrome and rhabdomyolysis, where rapid MR imaging is needed to improve management and prognosis. Myositis ossificans is a pseudotumor-like, rarely at the hand occuring condition which is more commonly observed in large muscles.

Focal lesions of the hand are commonly observed and often benign. MR imaging is the key modality to determine the location of lesions of the hand in relation to the surrounding tissues and can help to estimate the nature of lesions. It hence helps for further management, peroperative planning or, in case of malignancy, local staging of the primary tumor.

However, MR features of many lesions occuring at the hand are often non-specific. To facilate further management, it has been proposed to classify lesions as benign, intermediate grade and malignant, based on their margins, enhancement, bony involvement and other featuers.

They usually exhibit smooth or lobulated margins with preseved fat planes, only rarely cross compartments and show no bony destruction or extensive surrounding reactions. Often there is no or rim enhancement with no internal enhancement, but other enhancement patterns can be observed as well. 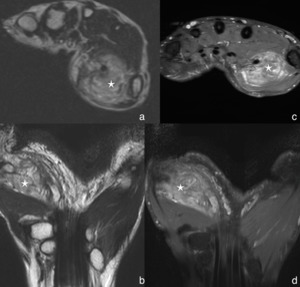 Fig. 19: Axial T1 weighted (a) and coronal T2 weighted (b) MR images show a well-circumscribed lesion (asterix) centered in the opponens pollicis muscle, with inhomogeneous T1 and T2 hyperintense signal. Heterogeneous enhancement of the mass (asterix) can be appreciated on axial (c) and coronal (d) contrast enhanced fat suppressed T1 weighted MR images. 30 years old patient was concerned about the swelling in his wrist at the thenar eminence and otherwise asymptomatic. Histologic result after incisional biopsy was consistent with Hemangioma. 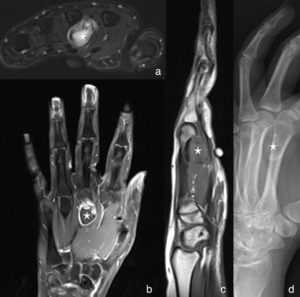 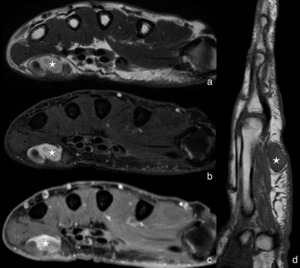 Fig. 21: Axial T2 weighted MR images without (a) and with (b) fat suppression show a well-circumscribed, hyperintense mass (asterix) with some hypointense, rounded foci. Areas with hyperintense signal on T2 weighted images showed also rather homogeneous, avid enhancement on axial contrast enhanced fat suppressed T1 weighted MR images (c). The lesion appeared intermediate intense on sagittal T1 weighted MR images and centered in the subcutaneous tissue of the hypothenar eminence. Giant cell tumor / extraarticular pigmented villonodular synovitis (PVNS) was suspected, but the lesion was histologically identifed as Intravascular Papillary Endothelial Hyperplasia (Masson's Tumor) with thrombosis. 71 years old patient reported growth of the lesion over one year and ocassional acute pain at the hypothenar eminence. Patient was refered to radiology because an intramuscular tumor (sarcoma) could not be excluded on initial clinical ultrasound.

Intermediate Grade Lesions (which are histologically benign but grow locally aggressive) include among others Neurofibroma, Desmoplastic Fibroblastoma, Giant Cell Tumor, or Glomus Tumor.

They often show lobulated or even smooth margins but can cross compartments or involve adjacent structures. Enhancement is often avid, but rather homogeneous.