Lesions of the talus: An educational pictorial review

Fig. 2: Histology of talar lesions in our patient cohort.

Fig. 4: Radiographs of a chondroblastoma with the talus demonstrating a well-defined...

Fig. 8: Radiographs of an osteoid osteoma in the dorsal neck of the talus demonstrating...

Fig. 9: Axial CT of an osteoid osteoma in the dorsal neck of the talus demonstrating a...

Fig. 10: Sagittal STIR MRI of an osteoid osteoma in the dorsal neck of the talus...

Fig. 11: Axial T1-weighted MRI of an osteoid osteoma in the dorsal neck of the talus...

Fig. 12: Radiographs of an osteoblastoma in the dorsal talus at the junction of the body...

Fig. 13: Axial CT of an osteoblastoma in the dorsal talus demonstrating a lytic lesion...

Fig. 14: Sagittal MRI (A) and (B) of an osteoblastoma in the dorsal talus demonstrating...

Fig. 15: Radiograph of an ABC in the talus demonstrating an expansile lucent lesion in...

Fig. 18: Sagittal T1 MRI of a GCT in the talus demonstrating an expansile, low signal...

Fig. 19: Axial STIR MRI of an ABC in the talus demonstrating an expansile, intermediate...

Fig. 20: Radiograph of an osteosarcoma in the talus demonstrating a lucent lesion in the... 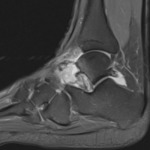 Fig. 22: Sagittal fat saturated proton density MRI of an osteosarcoma in the talus...

Fig. 23: Axial T1-wrighted MRI of an osteosarcoma in the talus demonstrating a solid...

Fig. 24: Radiograph of a metastasis in the talus demonstrating abnormal lucency and soft...

Fig. 25: Axial T1 MRI of a metastasis in the talus demonstrating a solid lesion centred...

Fig. 26: Sagittal STIR MRI of a metastasis in the talus demonstrating a solid lesion...

A review of both the pathology and oncology databases at a tertiary referral centre for orthopaedic oncology was performed for patients with talar lesions. Patient demographics, histology and imaging features were recorded where available. The site within the talus, involvement of subchondral bone, matrix mineralisation, marrow and soft tissue oedema and fluid-fluid levels were recorded.

The histology of talar lesions in our patient cohort is detailed in Fig. 2. Primary bone tumours were histologically-proven in 60 (80.0%) patients. The majority of primary bone tumours identified were benign (56 (93.3%) patients). Two metastatic lesions, including metastatic endometrial carcinoma and metastatic breast carcinoma, were identified in our patient cohort. The remaining 13 lesions included infectious, inflammatory and degenerative conditions.

Chondroblastoma was the most common lesion of the talus, accounting for 31% of lesions, followed by osteoid osteoma (16%). Histopathology data is detailed by patient age in tables 1 and 2. In patients under 30 years, primary bone tumours accounted for 97.7% of lesions, with chondroblastoma and osteoid osteoma accounting for 62.8% of lesions (table 1). There was one malignant lesion (2.4%), with one Ewing sarcoma identified in a 10 year old female patient. In patients over the age of 30 years, primary bone tumours accounted for 78.1% of lesions, however, the range of tumours was broad (table 2). Five (15.6%) malignant lesions were identified.

Twenty-five patients had magnetic resonance imaging (MRI) available for review. Based on a literature review and imaging features observed in our patient cohort, a proposed algorithm for differential diagnosis of talar lesions is detailed in Fig. 3.

The imaging features of some of the lesions observed in our patient cohort will be reviewed:

Chondroblastoma is a rare benign cartilaginous neoplasm which accounts for less than 1% of all primary bone tumours1, with a clear male predominance. Lesions in the foot occur in a slightly older age group (mean 25.5 years), in contrast to lesions in other locations2. A minority occur in skeletally immature patients2. The talus is an unusual but classic site for chondroblastoma. Treatment is with either detailed curettage and bone grafting or radiofrequency ablation for selected lesions.

First reported by Jaffe in 1935, an osteoid osteoma (OO) is a benign osteoblastic bone tumour which typically measures less than 1 cm in size6. The talus is the fourth most common site for OO, accounting for 2-10% of cases7,8. Talar OO occur in the neck in 97% of cases9. The majority of lesions in the foot are intramedullary or subperiosteal where periosteal reaction is minimal or absent10.

Histologically similar to OO, this a rare neoplasm, representing approximately 3% of benign bone tumours13. The foot and ankle is affected with relative frequency, with more than 20% of osteoblastomas occurring here. The talus is the most commonly affected bone, often at the junction of the dorsal neck and body14,15. Surgical excision and curettage are often the treatment of choice, however, radiofrequency ablation is a useful treatment option in selected cases.

Aneurysmal bone cyst (ABC) is an expansile collection of blood-filled cavities and typically affects patients younger than 20 years. It is considered primary in 65-99% of cases and secondary in 1-35% of cases16-19. Giant cell tumour, osteoblastoma and chondroblastoma are common lesions with secondary ABC. 12% of primary ABC affect the foot and ankle and the talus is rarely involved.

Ewing sarcoma is the second most common malignant bone tumour in the foot and ankle. It is an aggressive, primary, malignant round blue cell tumour.

Chondrosarcoma is a malignant tumour with pure hyaline cartilage differentiation. Approximately 1-3% of all chondrosarcomas occur in the hand and foot26,27. Chondrosarcoma can arise in a pre-existing benign cartilaginous lesion, including enchondroma and osteochondroma.

Metastases to the foot and ankle are uncommon, with a reported incidence of 0.01%. The talus is the fourth most common bone involved29. The most common primary malignancies with metastasis to the foot include genito-urinary, lung, breast and colorectal carcinoma.