Fig. 1: Demonstration of the different enthesial fibrocartilage at the Achillies...

In the last decade, new clinical and imaging criteria have vastly improved the diagnosis and outcome of patients with seronegative spondyloarthritis (SpA). Both axial and peripheral SpA have an approximate global prevalence of 1%. It is estimated that up to 30% of patients with SpA may exhibit predominant (or only) peripheral manifestations of SpA. Furthermore, in several documented cases a diagnostic delay of up 8 to 9 years has occurred and it is therefore essential to diagnose and treat SpA as early as possible (1).

SpA affects both males and females equally and usually within their second decade of life. In those diagnosed with SpA there is a strong association with HLA-B27, which can be present in more than 90% of patients (2).  The clinical manifestation of peripheral SpA includes most of the features common to the other forms of SpA.  Patients are often referred for isolated large joint imaging by clinicians not familiar or specialising in Rheumatology, who are unaware of symptoms and criteria related to SpA. It is critical that the radiologist raise suspicion of SpA when imaging extra-axial joints with specific imaging features.

The aim of this poster is to recap important points in the SpA classification systems and highlight specific imaging findings of peripheral SpA which should raise suspicion and appropriate specialist referral, to ensure early diagnosis.

The characteristic of peripheral SpA is inflammation of the enthesis (a thin fibrocartilaginous region joining the tendon or ligament to bone).

SpA is associated not only with synovitis but also with:

·enthesitis (inflammation of the ligament, tendon or capsule-bone insertion).

Entheseal inflammation is triggered by an innate immune response. Immune cell migration and deposition of inflammatory infiltrates at the entheses usually facilitate vasodilatation and hyperaemia, which are the earliest signs revealed on MRI and US. Perientheseal osteitis (appearing as soft tissue oedema) on fluid sensitive sequences, in the bone marrow adjacent to the entheses are also seen. In the late stage the proposed inflammatory pathophysiology involves a local release of proinflammatory cytokines and growth factors from the enthesis causing a secondary synovitis. Chronic synovitis in SpA results in both bone and cartilage erosion analogous to RA.

A well described enthesis is the Achillies tendon and it can commonly be involved in SpA Fig. 1  . 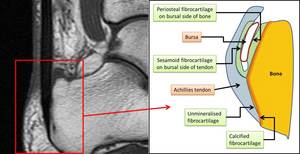 Broad division of SpA is based on the involvement of the spine and axial skeleton and split respectively into axial SpA (ax-SpA) and peripheral/ (non-axial) SpA. ASAS have developed the classification criteria for SpA, with emphasis on the role of presenting symptoms and imaging findings. Classification of peripheral SpA ( the main focus for this poster) requires two steps in the algorithm to make the diagnosis.

The initial entry criteria are based on the patient demonstrating one of the following three peripheral musculoskeletal manifestations.

It is crucial that classification should only be applied to patients who already have an established diagnosis. Until recently imaging diagnosis relied on conventional radiography. Radiographic changes of sacroiliitis, in SpA usually develop at least 5 years after symptom onset, with poor interobserver reliability, which leads to delayed diagnosis and treatment. MRI is now part of the ASAS classification criteria, in early detection, disease monitoring and the diagnosis of complications of peripheral SpA manifestations.

Assessment criteria, role of imaging and findings in the sacroiliac joint in seronegative arthritis are well established, whereas, non-axial findings on MRI are still being recognised. The understanding of the appropriate terminology applied in the rheumatological classification systems in combination with the divisions of SpA, allows a clinical centred reporting strategy for the radiologist. This will allow radiologists to suggest appropriate referral to a specialist and consider further imaging of the axial skeleton with appropriate clinical and immunological assessments to expedite diagnosis.