Fig. 2: Patient presenting with recurrent left ankle pain. MRI of the ankle was...

Fig. 3: MRI and Ultrasound (US) findings of Achillies enthesopathy in a patient...

Fig. 6: Patient presenting with right back pain and stiffness that had MRI imaging of...

Fig. 10: MRI was performed on a young Female patient who presented with heavy menstrual...

Both ultrasound (US) and MR imaging are highly specific to detect inflammatory and chronic enthesis-centred abnormalities.   Clinically enthesitis is often underdiagnosed due to is poor quantification, sensitivity and specificity. On imaging however, MR features of enthesitis are demonstrated by oedema and inflammatory foci within the soft tissue and bone marrow. There is also particular involvement of the tendons, ligaments, fatty tissue and perientheseal synovium. More chronic enthesopathic changes manifest as erosions and enthesophytes. Typically inflammatory MR findings manifest as areas of high sigh on fluid-sensitive sequences and regions of low signal intensity (SI) on T1 weighted imaging.

Below we highlight cases of peripheral SpA that presented for Imaging, referred by Non Rheumatologists, Orthopaedic surgeons and General Practitioners. A high index of suspicion for SpA should prompt tailoring of the radiology report accordingly and suggest early referral to rheumatology to consider SpA.

Case 1: Plantar fasciitis with enthesitis at the calcaneal insertion & FHL Tenosynovitis in a patient with right SI joint inflammation (Image not included). Fig. 2 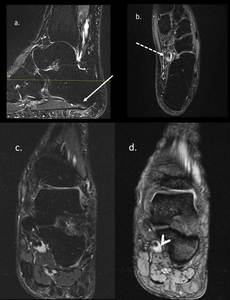 Fig. 2: Patient presenting with recurrent left ankle pain. MRI of the ankle was performed demonstrating plantar fasciitis, calcaneal insertion enthesopathy and Flexor Hallucis Longus tenosynovitis. The patient was later confirmed to have right SI joint inflammation and low back pain. Fluid sensitive STIR sagittal (a) and axial (b) sequences demonstrating focal high signal at the insertion of the plantar fascia on the calcaneum (SOLID WHITE ARROW) and tenosynovitis in the FHL tendon (DASHED WHITE ARROW). Coronal STIR (c) and T2W (d) sequences demonstrating fluid surrounding the FHL tendon (WHITE ARROW HEAD). The remainder of the medial tendons are preserved. This case highlights the importance of thinking of SpA as a cause for the patients imaging findings and early referral. 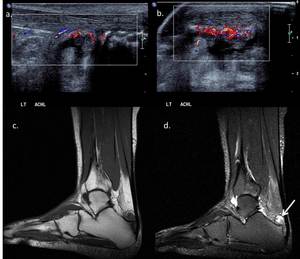 Fig. 3: MRI and Ultrasound (US) findings of Achillies enthesopathy in a patient confirmed to have axial spondyloarthritis. Longitudinal (a) and transverse (b) US section through the Achillies tendon demonstrating abnormal vascularisation of the cortical bone insertion on power Doppler imaging. The corresponding MRI (Sagittal T1 (c) and STIR (d) sequences) demonstrates fluid in the bursa (WHITE ARROW) and surrounding oedema and inflammation. Note the inflammation in the different fibrocartilage areas as previously discussed in Figure 1. Cortical irregularity, erosions and bilaterally, are also other pertinent findings to help differentiate from isolated Achilles tendinitis and consider SpA as an underlying cause. 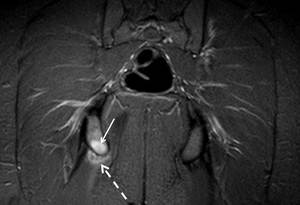 Fig. 4: Coronal STIR MRI image of a female patient demonstrating thickening and high T2 signal intensity oedema/inflammation of the hamstring tendon and bursa, at its insertion on the right ischial tuberosity (DASHED WHITE ARROW). Associated osteitis and bone marrow oedema is noted in the right ischial tuberosity (WHITE ARROW). The patient presented with and was investigated for left hip pain. These imaging findings should prompt the radiologist to suggest undiagnosed SpA. The patient was diagnosed with psoriatic arthropathy. 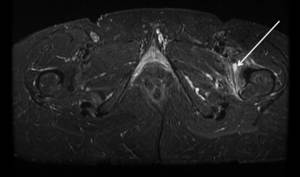 Fig. 6: Patient presenting with right back pain and stiffness that had MRI imaging of the spine and SI joints. Axial oblique T1 (a) and STIR (b) sequences demonstrates right greater trochanter enthesitis (white arrow) at the gluteal medius insertion. This case highlights the importance of assessment of entheses outwith the SIJ for enthesitis. Confirmed MR stigmata of SpA were noted on the spinal and S.I. joint imaging.

Dactylitis: Diffuse soft tissue swelling within a digit, with uniform thickness and the non-recognition of a joint swelling is characteristic of dactylitis. The disease process can involve the whole digit or a smaller proximal section.

Within a dactylitic digit, both US and MRI play a crucial role in correctly delineating the specific tissue compartments involved. Flexor tendon tenosynovitis and joint synovitis are present is nearly 90% of cases and can be easily identified in both modalities. Also evident in up to 30% of cases are extensor tendon inflammation with or without extratendinous soft tissue thickening. On MRI bone marrow oedema can be present usually within a painful digit.

Psoriatic Arthropathy:  Patients with Psoriatic arthropathy (PsA) however have several typical late radiographic peripheral manifestation including fluffy periostitis, new bone formation at the site of enthesitis and ‘pencil-in-cup’ deformity. Our experience is that fewer patients manifest with these findings and present to a rheumatologist early. 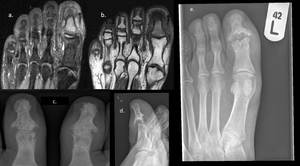 Fig. 7: Psoriatic Arthropathy (PsA) Ivory phalanx. This commonly involves the hallux and is important when Joint changes are not present. Features are “cloaking” of bone with new bone formation which is an uncommon but specific finding in PsA. Foot MRI: STIR (a) and PD (b) coronal images demonstrating signal changes of periosteal and endosteal bone formation in the big toe. An uncommon but specific finding in PsA. The corresponding plain radiographs of the big toes (c) and a separate case (d-e) demonstrating terminal phalangeal sclerosis with periosteal and endosteal bone formation. Note in (c) the increased radiodensity of the entire phalanx in a patient with Psoriasis. This is termed the 'Ivory Phalanx'. 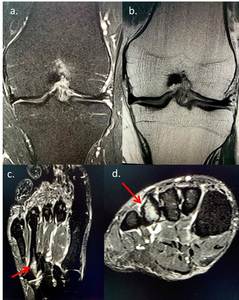 Fig. 8: Psoriatic arthropathy presenting in the knee-intercondylar notch. Coronal MRI STIR (a) and PD (b) images depicting erosions in the ACl enthesis and focal osteitis with bone marrow oedema. The same patient presented with enthesopathy of the intermetatarsal ligaments and the TMTJ capsule of the 4th toe as seen on the MRI of the left foot coronal STIR (c) and axial STIR (d) images and highlighted by the RED ARROWS. 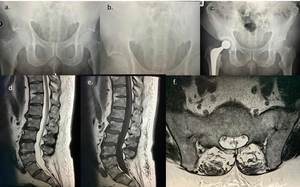 Fig. 9: Patient presented with persistent right hip pain to the Hip Surgeon.A high index of suspicion for SpA is emphasised, in younger patients with no significant degenerative change on the pelvic radiograph. An initial plain radiograph (a) was performed for right hip pain which showed no evidence of degenerative change. The patient represented to orthopaedics 1 year later with persistent pain and a subsequent pelvic radiograph (b) again demonstrated no degenerative change in the right hip. A right hip replacement was subsequently performed (c) as the patients pain did not improve. Note that on all three radiographs (a-c) bilateral SI joint sclerosis is present which was not promptly referred to rheumatology. The patient hip pain continued post hip replacement and subsequent referral to spine surgeons was made for sciatica. Imaging of the spine with the least slice through the SI joints demonstrates ankylosis of the SIJ, corner fat lesions and syndesmophtyes in the spine on MRI (d-f). 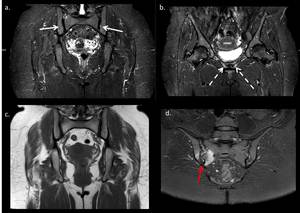 Fig. 10: MRI was performed on a young Female patient who presented with heavy menstrual bleeding with lower pelvic and back pain. Initial MRI imaging of the pelvis was performed (Coronal STIR (a -b) and T1 (c) weighted sequences) which demonstrated no abnormality in both SI joints (SOLID WHITE ARROW). Para-articular bone marrow oedema in both pubic symphsis (DASHED WHITE ARROW) was noted in keeping with a diagnosis osteitis pubis. No gynaecological cause for the pain was identified. It was noted that the patients pain occurred in flares and related to catamenial inflammation. A subsequent MRI of the SI joints (d) performed 6 months later and demonstrated the manifestations of axial SpA (RED ARROW) and the patient was later fully diagnosed with PsA.
References: Department of Radiology, Kettering General Hospital, Kettering, UK

Case 10: Extensive enthesopathic findings in the knee – not to be missed or misinterpreted Fig. 11 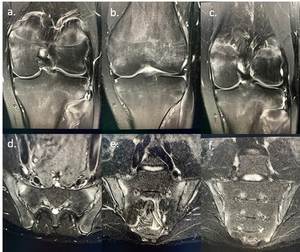 Fig. 11: 18 year old with knee pain and no trauma. STIR coronal of the left knee (a-c) and STIR oblique axials of the SI Joints (d-f). There are enthesopathic changes of nearly every ligament in the knee – particularly the ITB, both collateral, semi-membranosis and proximal tibio-fibular joint. There is reactive synovitis with capsular enthesopathy. The corresponding SIJ demonstrates erosions, capsulitis and fat metaplasia in the SIJ is pathogmonic for SpA.
Home | Browse posters | Help | Privacy policy | Disclamer | Contact | myESR
© 2003-2021 ESR - European Society of Radiology