Mosaic attenuation (Inhomogeneous lung opacity) is a term of describing computed tomography (CT) imaging pattern. It is used to describe when inhomogeneous areas of differing lung attenuation are seen. Definition suggested by Fleischner society is ‘‘Patchwork of regions of differing attenuation seen on CT of the lungs”. Originally it was called as “mosaic oligemia and perfusion”. But mosaic attenuation is more inclusive term, and mosaic oligemia or mosaic perfusion implies ‘pulmonary vascular pathology’.

Predominant cause of mosaic lung attenuation

Definition of small airway is non-cartilaginous airways with internal diameter below 2mm or 8th generation of airways down to terminal & respiratory bronchioles. It is normally non-visible on CT, but visible due to underlying disease. Pathophysiology of the low attenuation area is when there is an obstruction of a small airway, in spite of aeration through collateral airflow (pores of Kohn, canals of Lambert, channels of Martin), ability of adequate gas exchange is reduced in involved lung and result in reflex hypoxic vasoconstriction which means blood is shunted away (Fig.  2). This mechanism decrease blood perfusion and more lucent appearance with decrease size of vasculature and even decreased number of vasculature (Fig. 3) 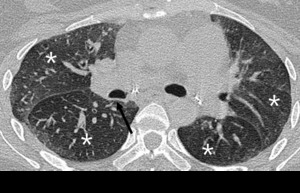 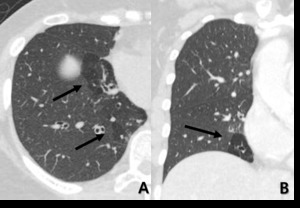 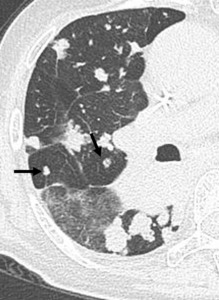 Ground glass opacity (GGO) is increased lung attenuation through which underlying airway and vessels remain visible (Fig.6). There is a lot of etiology to induce GGO. Pathophysiology are thickening of alveolar wall due to inflammation or fibrosis, alveolar collapse, increased capillary blood volume, presence of fluid, cells, amorphous material partially filling alveolar spaces, and combination of these. 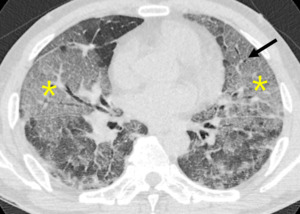