Fig. 7: Decreased size of the vasculature (arrow) is prominent in the hypoattenuated...

Fig. 8: 72-year-old man with constrictive bronchiolitis obliterans (A) on inspiratory...

Fig. 12: Other, 71-year-old woman with bronchiectasis. Subsegmental or larger than...

Below are strategies for differential diagnosis.

When you face to mosaic pattern lung attenuation, to determine which portion of the lung parenchyma is abnormal is most important point and that is the first step to do. 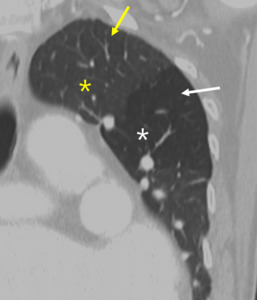 Fig. 7: Decreased size of the vasculature (arrow) is prominent in the hypoattenuated region (white star) of the left upper lobe. Compare the equivalent size of vasculatues in the normal attenuated lung (yellow star) of the apical lung.

Some pitfalls are existing. Some degree of heterogeneity is expected in normal individuals. Areas of lobular air trapping may appear 40-50% in normal patients. Otherwise, air trapping involving more than one segment usually indicated underlying pathologic causes. Inadequately performed due to lack of patient effort or poor coaching could be happened. To check the adequate effort, you need to check posterior wall of trachea and main-stem bronchi should bow inward due to increased intrathoracic pressure.

Occasionally, air trapping can be seen in pulmonary vascular disease or lung parenchymal disease. CTEPH is due to reactive bronchoconstriction. Hypersensitivity pneumonitis is due to mechanism of disease primarily involve respiratory bronchioles, and DIP is due to coexistent RB.

Fig. 9: 58-year-old woman with pulmonary arterial hypertension (PAH). (A) Enhanced CT scan shows more dilatation of the pulmonary trunk in comparison of the diameter of aorta at the level of bifurcation of both right and left main pulmonary arteries. (B) Area of hypoattenuated lung (white star), larger than lobular extent, can be considered as vasoconstriction of PAH, comparing of pulmonary vasculatures within hypoatttenuated area to surrounding normal lung. 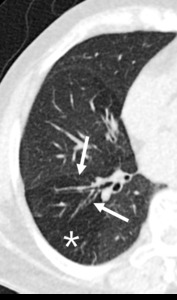 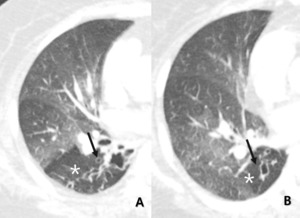 However, hazy ill-defined centrilobular nodule with diffuse GGO could be a mixed decreased and increased pattern of lung attenuation. These can be due to hypersensitivity pneumonitis, smoking-related lung disease (respiratory bronchiolitis, RB-ILD, DIP). In case of pulmonary vascular disease, airways are usually normal. 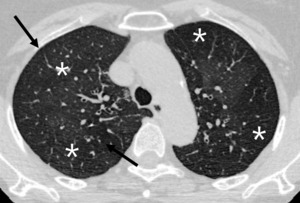 Features of right heart strain are dilated ventricle and bulging of interventricular septum. IVC dilatation with contrast reflux to hepatic vein indicated RV failure. These findings imply pulmonary hypertension. Therefore, mosaic attenuation with RVH could be due to pulmonary vascular cause, PAH (Fig. 15). On the other hands, left vertricle hypertrophy or left atrium dilatation with mosaic pattern implies pulmonary edema, more likely (Fig. 16). In case of small airway, the heart features are non-specific.

In the case of CTEPH, peripheral fibrotic lesion on the low attenuation area could be seen (Fig. 17). It is result from peripheral scarring form the prior lung infarction. In the cases of small airway disease and PAH, fibrosis is not common. 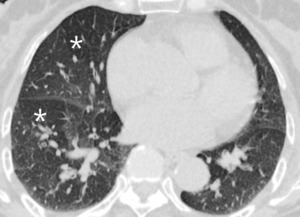 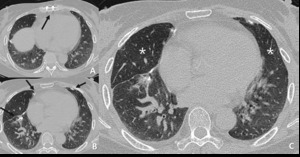 To differential diagnosis of parenchymal disease.

Ground glass opacity (GGO) is increased attenuation in the lung with preserved bronchial and vascular markings. This finding is non-specific sign with a wide etiology.

To differential diagnosis of mixed increased and decreased attenuation disease.