Fig. 4: Male, 63 yo. Myeloma tumorous lesions developed to the right scapula and to the...

Fig. 5: Male, 65yo. Myelomatous lesion developed at S1-S3 vertebrae extended in the...

In the study were included patients with MM diagnosed (were selected patients in the third stage of the disease, known with plasmacytomas confirmed by biopsy, symptomatic and during treatment, at which imaging controls are performed at about 6-12 months) who were evaluated by WBLDCT exam, in a single spiral acquisition covered the skull to the femoral bones, followed by processing in sagittal and coronal reconstructions in a bone and soft tissue windows and of course, image analysis.

Typical features of MM were analyzed on WBLDCT images and qualitatively compared with the standard CT findings in order to define the most important potential ways of increasing accuracy (2). 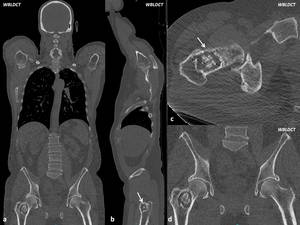 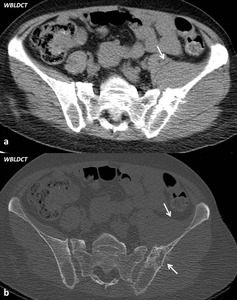 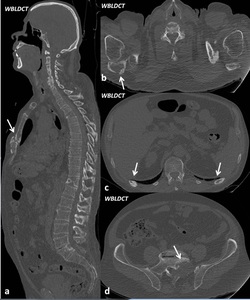 Fig. 3: Male, 66 yo. Numerous lytic lesions with bone destruction associated, having the following topography: at the right scapula, at the sternal manubrious with fracture associated, in the IX and XI right posterior costal arches, respectively, at the IX-XI left posterior costal arches and at the vertebral bodies, the most significant being the osteolytic lesion from the L5 vertebral body with extension to the medullary canal and at the left sacral wing. DLP: 416 mGy*cm. 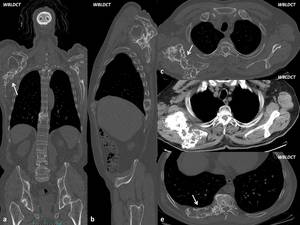 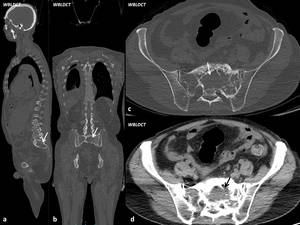 Fig. 5: Male, 65yo. Myelomatous lesion developed at S1-S3 vertebrae extended in the anterior sacral holes, as well as in the left iliac wing. DLP: 449 mGy*cm.

Conventional CT gives an improved sensitivity in detecting lytic lesions, especially the small one (<5 mm that can be missed on x-ray), offers a high resolution three-dimensional CT images that can provide a detailed evaluation of the bone, allows a good visualising soft tissue involvement, assess spinal fracture stability, can detect spinal cord and cauda equina compression (although MRI is superior for this), is useful in guiding needle biopsies and surgical interventions and also in planning radiotherapy. Despite a number of advantages, conventional CT uses higher doses of radiation (from 920-3080 mGy in these cases for CT of the head, neck, chest, abdomen and pelvis).

For this reason, WBLDCT has begun to be the most widely used imaging method in patients diagnosed with MM, because uses a lower tube voltage (kV) and current (mAS) to reduce the energy delivered to the patient to an effective dose of approximately 320-1038 mGy (in the cases from this study). The reduction of the dose comes with a reduced image resolution, but this can be partly offset by reconstruction techniques so that WBLDCT can now be performed at a similar dose to skeletal survey. So nowadays, the European Myeloma Network guidelines recommend as first-line imaging investigation the WBLDCT, because this method accurately assess the extent of bone destruction and remains more sensitive than plain x-rays.

The advantages of WBLDCT are the following:

As limitations of WBLDCT must also be recognized the following:

Low dose CT is given without IV contrast, and its a unique spiral acquisition including the skull, cervical compartment, the thoracic, abdominal and pelvic regions, proximal humerus, and femoral bones, with a field of view (FOV) set at about 400 mm (adjusted to individual patients during examination planning). The diagnostic images can be achieved with parameters such as 120 kV, <70-90 mAs, dose modulation, and iterative reconstruction. Slice thickness was set at 1mm and slice increment at 0.8mm (slice increment smaller than thickness was used to avoid step artifacts on secondary coronal/sagittal reconstructions). Two sets of axial images were reconstructed from the raw data obtained during scanning: for bone assessment using sharp kernel and for soft tissue assessment using soft kernel. From every set of axial images, secondary coronal and sagittal reconstructions were generated using slice thickness of 1mm and slice increment of 1mm.

The outcome of the WBLDCT examination should contain the following information: