The design, development, and implementation of the automated CT monitoring system, a phased design was implemented, which was carried out during the second half of 2018, for subsequent implementation in 2019.

The monitoring platform was developed in MATLAB, which granted a) the use and integration of tools for DICOM image analysis, b) implementation of hypertext transfer protocols and c) use of DICOM transfer tools, which allowed the integration of the platform with the RIS (Radiology Information System) and PACS (Picture Archiving and Communication System).

Dataset collection for the development of analysis algorithms

From the RIS / PACS system, 40 studies were collected from three scanning teams (Aquilion ONE, LightSpeed ​​VCT, and Biograph 128) which were transferred through DICOM protocols.

Analysis of the information

The characteristics of the studies were obtained using analysis of the metadata of the DICOM header for the classification, calculation, and evaluation of the scanning equipment. Once classified, optical character recognition (OCR) algorithms were implemented for studies from the Aquilion ONE and Biograph 128 equipment for the extraction of the Product Dose Length (DLP); while in the LightSpeed ​​VCT device it was obtained directly from the DICOM metadata. Subsequently, the effective dose (SD) was calculated for each study, through the multiplication (Eq. 1) of the DLP and the normalized effective dose coefficient of the irradiated area (Wt weighting factor), which was obtained by the BodyPart comparison of the study between the weighting factors of organs and tissues established by the ICPR (International Commission for Radiological Protection) in its publication 103. Finally, through the implementation of a secure hypertext transfer protocol (HTTP), the information was sent to a cloud data portal in which follow-up analyses were performed.

The platform was implemented on a Windows Server 2008 R2 Standard server with an 8 Gb RAM and an Intel (R) Xeon (R) processor, which is connected to the local radiology service network, as node DICOM in the RIS and PACS systems for send and receive information, and is in continuous service allowing the uninterrupted transfer of studies. At the same time, the system reviewed the studies stored on the server in intervals of one hour for the classification of the study, the elimination of unnecessary files and the transfer of the images necessary for the evaluation, which was carried out daily in conjunction with the export of data to the online data portal. 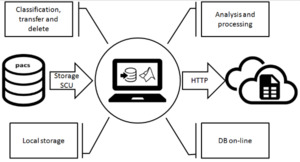