Table 1: Diagnostic requirements according to the EC European Guidelines on quality... 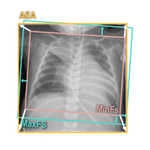 Seven hundred twenty-three (n = 723, 47.7% female 52.3% male) unprocessed DICOM images of digital radiographic (DR) chest X-rays of PICU patients were acquired from the local PACS at the author’s sponsoring institution. An approval by the local ethics committee (29-558 ex 16/17) was acquired prior to the collection of the images from the archives.

Qualitative and Quantitative parameters: A semi-automatic analysis was performed using a custom Fiji ImageJ Macro proposed by a preceding study. [5, 8] The qualitative parameters were based on the EC guidelines as depicted in Table 1.

Quantitatively, field sizes according the recommendations suggested by the EC guidelines were defined (Figure 1). There, a minimal field size (MinFS) extending from above the lung apices to T12/L1 is recommended. The outside of the thoracic cage was chosen as a lateral border, as the EC guidelines do not specify such. The maximal allowed field size (MaxFS) was computed by adding an age-dependent tolerance (as listed in Table 1). An actual exposed area (AEA) was defined in order to compute overexposure. Additionally, we analysed rotation, distances between the margins of the measured field sizes (MinFS, MaxFs, and AEA), the position, and possible truncation of the costophrenic angles (Figure 2).