To assess the local practice of wearing film badges during fluoroscopic procedures at RMI, Peshawar keeping the target as 100%.

All radiology personnel present during fluoroscopy should be wearing a personal dosimeter at all times.

All non-radiology personnel present during fluoroscopy should be wearing a film badge.

This was a blitz audit. In this audit, a survey was done from personnel working in fluoroscopy procedures in the departments of diagnostic radiology, interventional radiology and cardiology at RMI, Peshawar.

The respondents were observed whether they used the film badge during procedure. In order to eliminate any bias, the collected data was then compared to the film badge reading data provided by the radiation protection officer.

Helping staff and gastroenterologists were not included in the study as no film badges were provided to them.

The collected data was then analyzed.

The data collected showed that out of 24 personnel, 10 (41.6%) wore the film badge during fluoroscopic procedures. It was 50% in diagnostic radiology, 75% in Interventional radiology and 33% in cardiology. 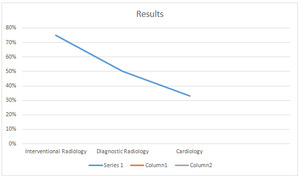 The results of our audit raise concern and further evaluation of the medical personnel should be done in order to know any health issues. 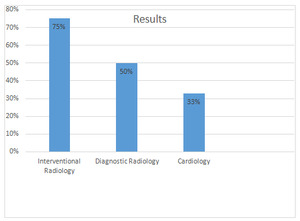 The present study was conducted in order know the insight of medical personnel working with radiation. Dosimetry audits are a routine part of radiology departments through out the world. The lack of such audits and knowledge of radiation hazards can be dangerous for both staff and patients. One of the studies conducted by Awosan, Ibrahim et al. in northern Nigeria about radiation and dosimetry showed that (59.1%) had good knowledge of radiation hazards, 52.7%) had good knowledge of Personal Protective Devices (PPDs), 27.3%) consistently wore dosimeter, and few (10.9% and below) consistently wore the various PPDs at work. Our audit also showed that personnel exposed to radiation did not wear their devices. This fact reflects on the degree of knowledge of the staff. Also in the same research it was concluded that 1.2% of 86 participants had abnormal chest X-ray findings, 9.4% of 85 participants had abnormal abdominal ultrasound findings 5 .