Fig. 1: The pathomechanism of GGO is the partial collapse or filling of the alveoles,...

Fig. 2: The same axial slice through the upper part of a lung with reticular...

Fig. 3: On the left image, the GGO in the posterior lower lobes represents dependent...

Fig. 4: If mosaic perfusion is present, the less attenuating parts (blue circles) are... 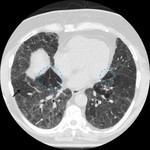 Fig. 6: The diagnostic approach should be adjusted to whether GGO is acute (less than a...

Table 1: Clinical features and their associated pathologies in cases with diffuse GGO

Fig. 7: Pathologies with GGO in a mid to lower distribution; the image is taken from a...

Fig. 8: The upper lung zones also include the apical segments of the lower lobes, as...

Fig. 9: A peripheral distribution (a) is commonly found in different interstitial... 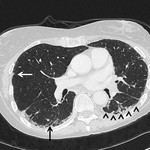 Fig. 12: The tree-in-bud-sign is quite specific for infections (with some rarer... 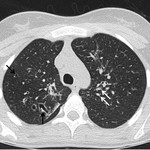 Fig. 13: If GGO is found in conjunction with inflammatory bronchiectasis (black arrows)... 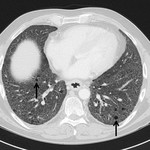 Fig. 14: Diffuse GGO together with cysts (black arrows) may occur in pneumocystis...

Fig. 15: As smoking is a typical risk factor of desquamative interstitial pneumonia...

Fig. 16: Crazy paving is a typical pattern found in pulmonary alveolar proteinosis. In...

Fig. 17: Centrilobular GGO-nodules are evenly spaced and show a subpleural sparing. They...

Fig. 18: Solid nodules may be present together with diffuse GGO in aspiration,...

Fig. 19: In acute interstitial pneumonia (a), the consolidations (black arrows)...

Fig. 20: In this case of Pneumocystis jirovecii pneumonia, GGO is the predominant...

Fig. 21: In an acute setting, distribution of GGO is not suitable to guide the...

Fig. 25: There are peripherally distributed regions of GGO (black arrows) in this case...

Fig. 26: A smoking history, GGO in a lower distribution and cysts (white arrow) are key...

Fig. 27: In patients with immunosuppression or connective tissue disease, and diffuse...

Fig. 28: There are different patterns of organizing pneumonia (OP). a) a case of...

Fig. 29: The diffuse and bilateral GGO in this image is an uncommon manifestation of...

Fig. 30: In this case of mucinous alveolar adenocarcinoma of the lung, most of the GGO...

Pathophysiology of GGO on CT scans

Ground glass opacifications are one of the most commonly encountered pulmonary patterns in chest CTs. The underlying mechanism is an increase in density caused by a partial filling or collapse of the alveoli or the thickening of the interstitial tissue (Fig. 1).

Alveoli may fill with:

A collapse of alveoli may be triggered by:

An increase of surrounding interstitial structure occurs in:

1.) Is it a pathology? (mind the inspiration depth and the overall quality of the scan)

One of the most common findings simulating GGO is insufficient inspiration depth and dependent atelectasis (Fig. 2 & 3). A look at the posterior membranous tracheal wall can help to make sure that the patient has inhaled sufficiently (Fig. 2). The typical distribution of dependent atelectasis in the posterior parts and adjacent to vertebral bodies further helps to distinguish them from GGO.

A second scan in deep inspiration or in a prone position can help to ventilate previously less aerated lung regions (Fig. 3).

Another pitfall is the misclassification of normal lung tissue as GGO in mosaic perfusion or next to air trapping. In this situation, scans both during inspiration and expiration are mandatory:

If all three patterns (normal, GGO, air trapping) are present, the distinction between the respective patterns becomes difficult. However, this combination by itself is specific for hypersensitivity pneumonitis and is called head-cheese-sign (Fig. 5).

Acute: less than a few weeks

3.) What is the patient’s medical history?

Table 1 lists clinical features that are associated with pathologies that commonly produce GGO.

All causes of acute GGO may lead to similar patterns, rendering the distribution less important in acute situations.
Generally, the following distributions can be distinguished: Mid to lower vs. upper lung zones (Fig. 7 & 8), and peripheral vs. central lung zones (Fig. 9 & 10).

Fibrotic changes (NSIP, late stages of other diseases such as HP, DIP, LIP, Sarcoidosis):
A first look should assess if there are fibrotic changes, including irregular reticulation, traction bronchiectasis, honeycombing and decreased lung volume (Fig. 11).

These findings are all common in large and small airways disease. If there is a region of distinct tree-in-bud, infection is very likely (Fig. 12).

Bronchiectasis is often irreversible (particularly if there is cystic bronchiectasis as this resembles long-standing pathology). However, cylindrical bronchiectasis in regions of GGO may resolve during convalescence (Fig. 13).

Distinct mosaic perfusion and air trapping (HP):
In combination with GGO, this pattern is typical for hypersensitivity pneumonitis (Fig. 4).

Cysts (DIP and LIP): (Fig. 14)
GGO is less common in other cystic diseases, therefore the differential diagnosis of acute GGO with cysts should include Pneumocystis jirovecii infection (cysts occur in 30% of cases (2)), and in a chronic setting desquamative and lymphocytic interstitial pneumonia.

Emphysema (DIP & RB): (Fig. 15)
Emphysema, GGO, a history of smoking, and cysts are enough for the diagnosis of DIP without a biopsy. However, due to the high prevalence of emphysema, this finding should not be over-interpreted as it may merely coexist with a different disease.

Nodules (infection, aspiration, HP, RB, FB, invasive mucinous adenocarcinoma of the lung, sarcoidosis):
Centrilobular nodules: this pattern shows a sparing of the immediate subpleural space, an even distance between the nodules and resembles peribronchiolar inflammation, fibrosis or lymphatic infiltration. Together with GGO, it is commonly encountered in hypersensitivity pneumonitis, atypical infections, respiratory bronchiolitis and follicular bronchiolitis (when the nodules are of GGO density - Fig. 17) or endobronchial spread of infections, tumor and aspiration (when the nodules are solid - Fig. 18).

Consolidations (aspiration, OP, EP, invasive mucinous adenocarcinoma of the lung):
Whereas the spectrum from GGO to consolidations is continuous, some pathologies commonly occur with consolidations next to GGO (Fig. 19).

Pathologies with GGO as one of the predominant patterns:

The most common atypical pathogens causing infections include viruses, Pneumocystis jirovecii (Fig. 20), and bacteria such as Legionella pneumophila, Chlamydia pneumoniae, and Mycoplasma pneumoniae. Compared to common pulmonary infections, atypical infections may cause more subtle respiratory symptoms, present without marked leukocytosis, and frequently do not respond to empirically administered antibiotics.

Pulmonary hemorrhage may be focal or diffuse.

Causes of focal pulmonary hemorrhage may be identified on HRCT and include bronchiectasis, malignancy, trauma, mycetoma, and thromboembolic disease.

Diffuse pulmonary hemorrhage is a manifestation of a systemic disorder such as vasculitis, pulmonary-renal syndromes or decreased coagulation.

DAD is the pathological correlate of the adult respiratory distress syndrome (ARDS) which may occur secondarily to a multitude of causes (e.g., trauma, inhalation injury, infection, multi-organ dysfunction, …) or idiopathically (= acute interstitial pneumonia).

Aspiration shows an acute onset and occurs in a variety of disorders, such as gastroesophageal reflux disease or dysphagia (neurogenic disorders).

An acute presentation of HP is rare and is similar in appearance to the subacute stage of HP (see further down).

AEP is characterized by an acute onset of respiratory symptoms and commonly occurs in smokers. While bronchoalveolar lavage and pathology show eosinophilic infiltration, peripheral eosinophilia is often missing in AEP. While Corticosteroids may achieve rapid amelioration within days, AEP may also progress towards fatal ARDS.

NSIP may be cellular (with more inflammation and possibly reversible) or fibrotic (irreversible). Its commonest association is connective tissue disease and when there is an NSIP-pattern in such a patient this is enough for diagnosis even without a biopsy.

An inflammatory reaction in smokers from alveolar macrophages surrounding the bronchioles; there is a strong overlap of RB and DIP. They often coexist as they resemble different manifestations of the same pathological spectrum.
A history of smoking, GGO, emphysema, and cysts are enough for the diagnosis of DIP without a biopsy.

An infiltration with lymphoid follicles in the interstitium (LIP) and around bronchioles (FB); there is a strong overlap of LIP and FB. They often coexist as they resemble different manifestations of the same pathological spectrum.
The diagnosis of LIP or FB is more likely in patients with a history of immunosuppression or connective tissue disease (especially Sjögren’s disease).

50% of OPs are idiopathic (= cryptogenic OP; COP) and 50% are in association with other diseases (especially infections and hypersensitivity pneumonitis). OP responds to steroids but can recur after the treatment has finished.

Overshooting immune reaction to organic antigen exposure (e.g., bird droppings, hay, …) leads to symptoms over the course of weeks to months. An acute progression after exposure to large amounts of antigen is rare.

EP shows a peripheral eosinophilic infiltration of the lung and an increase in blood eosinophiles. Chronic EP is the most common idiopathic eosinophilic disease.
There are several clinical associations depending on the subtype of EP, especially  asthma (chronic EP, and others), cardiac and nervous system (hypereosinophilic syndrome), central nervous system and skin (eosinophilic vasculitis = Churg-Strauss-Syndrome).

Normally, a perilymphatic distribution is the typical finding in pulmonary sarcoidosis. However, in rare cases, GGO can be the predominant pattern.

Mucinous adenocarcinoma of the lung: (Fig. 30)

Whereas the non-mucinous type of adenocarcinoma is more likely to result in a single GGO-nodule, the mucinous type grows alongside the inner walls of the bronchioles (= lepidic growth), secretes fluids and leads to a bronchopneumonia-like image.
Patients may produce large amounts of watery sputum (= bronchorrhea)

An autoimmune reaction leads to a decreased removal of lipoproteins in the alveoli. Nearly 90% are idiopathic and symptoms are nonspecific.
CT can guide the bronchoalveolar lavage and monitor the treatment effect.