MR spectroscopy is a non-invasive technique used to measure the concentrations of different low-molecular weight chemicals within the body. Spectroscopy focuses on carbon-bound protons in the range of 1–5 ppm chemical shift scale and can depict metabolites that are present at high enough concentrations.1,2

MR Spectroscopy is based on chemical shift effect. The chemical shift is the position on the δ scale (in ppm) where the peak occurs. The frequency of precession of a nucleus is directly proportional to the strength of magnetic field experienced by it. Electrons around nearby nuclei may either oppose (shielded) or reinforce the B0 magnetic field (deshielded) experienced by the proton. A shielded proton experiences lower external field and has a lower resonance frequency than a deshielded proton - this is called as chemical shift effect.3-5 This electron shielding causes the observed resonance frequency of the atoms to be slightly different and therefore identifiable with MRS  Fig. 2 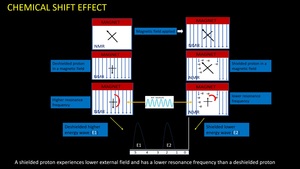 Fig. 2: Principle of Chemical Shift effect. Electron cloud surrounding the nuclei can shield the proton so it experiences a lower magnetic field than a deshielded proton.So the resonance frequency of shielded proton will be less than that of the deshielded proton

Two basic requirements for obtaining MRS is Shimming and Water suppression. Magnetic field is made homogenous by the process of shimming. Water suppression is very essential as concentration of water molecules to metabolites is about 10,000: 1, so if water is not suppressed metabolite peaks will not be discernable. 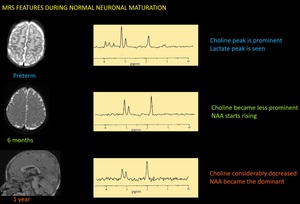