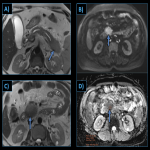 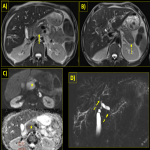 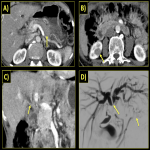 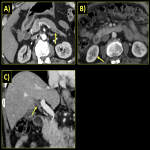 It is the commonest organ involved in IgG4-related diseases. IgG4 related diseases cause type I autoimmune pancreatitis (AIP) whereas type 2 AIP is a distinct entity seen in younger population and typically limited to the pancreas. AIP type 2 usually does not relapse after steroid therapy and is characterized by normal serum IgG4 levels [3]. Definite distinction between the two types can be made on histopathological assessment. Pancreatic involvement is often mistaken for other sinister pathologies like pancreatic lymphoma, adenocarcinoma and other forms of pancreatitis. 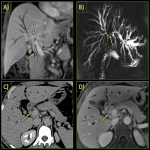 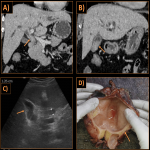 Fig 6: 55-year-old male with IgG4-related involvement of gall-bladder and biliary...

After pancreas, biliary system is the second most commonly involved system in IgG4 related diseases and is involved in up to 90% of patients with AIP [1]. Both intrahepatic as well as extrahepatic bile ducts are involved, but the commonest part involved is the intrapancreatic part of CBD. The characteristic imaging features of IgG4 cholangitis include focal or diffuse bile duct wall thickening, long segmental strictures in involved segments and resultant upstream biliary dilatation, that are readily detected by MRCP and CT.

The primary differential diagnoses to be considered are primary sclerosing cholangitis (PSC) and cholangiocarcinoma. Their primary features are summarized below. 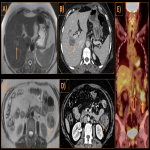 Hepatic involvement is less common in IgG4-related diseases and can present as inflammatory pseudotumor (IPT), chronic active hepatitis or rarely as hepatic hilar soft tissue mass. Imaging findings of IPT are non-specific and it may present as a solitary or multifocal mass. On CT scan, the mass demonstrates variable enhancement pattern with the commonest pattern being that of delayed enhancement. On MRI, they are hypointense on T1WI, hyperintense on T2WI and demonstrate heterogeneous contrast enhancement. Restricted diffusion may sometimes occur mimicking an abscess [4]. Other differential diagnoses include hepatocellular carcinoma and cholangiocarcinoma. The diagnosis is established by histopathology and elevated serum IgG4 concentration. 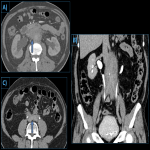 In the retroperitoneum, IgG4 related disease causes retroperitoneal fibrosis (RPF) which may manifest as a periaortic soft tissue mass or peri-ureteral mass that encases and narrows ureters producing upstream hydroureteronephrosis. These masses typically demonstrate delayed enhancement. On MRI, they show high signal on T2WI and low to intermediate signal on T1WI with variable degree of contrast enhancement on post gadolinium images depending on the degree of inflammation and fibrosis. Differential diagnosis includes lymphoma and other causes of RPF such as infection, radiation or trauma. The affected areas demonstrate avid uptake on FDG PET-CT.

IgG4 disease may also involve the vessels and cause aortitis, peri-aortitis which is identified by vessel wall-thickening and enhancement and may be complicated by aneurysm or dissection if left untreated [1]. 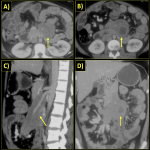 In the mesentery, IgG4 disease manifests as sclerosing mesenteritis which is an inflammatory condition characterized by chronic inflammation, fibrosis and lipodystrophy. On CT, it manifests as a soft tissue mass which may involve and narrow the mesenteric vessels. Calcification has been reported in about 20% cases. On MRI, it usually demonstrates hypointense signal on T1WI and T2WI due to the predominance of fibrotic content.  Differential diagnosis includes inflammatory pseudotumour, mesenteric panniculitis, fibromatosis and lymphoma [3]. Biopsy and histopathological examination is required to establish the diagnosis and in avoiding a futile major surgery. It improves after steroids similar to other IgG4 related diseases. 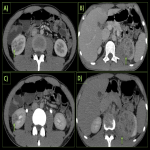 Fig 10: 18-year-old-male with IgG4 related renal involvement; who presented with...

Kidneys are involved in approximately one-third of these patients. Pathologically, the most common manifestation is tubulointerstitial nephritis followed by membranous glomerulonephritis [3]. Most commonly, the renal parenchyma is involved, but it may also involve perirenal tissue, renal sinus and pelvis. On imaging, the patterns of involvement are: round or wedge-shaped cortical lesions, diffuse patchy lesions, nodular lesions in renal sinus and diffuse wall thickening of renal pelvis [2]. Important differentials include lymphoma, pyelonephritis and metastasis. 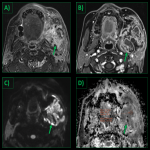 The most commonly affected organs in head & neck include salivary & lacrimal glands (manifesting as painless swelling of these glands), orbits and thyroid [2]. Involvement of buccal mucosa is very rare. Orbital pseudotumour can part of the orbit and it may be unilateral or bilateral. MRI demonstrates low signal on T1 and T2WI due to the fibrosis, with intense enhancement on post contrast images. Important differentials to rule out include lymphoma, fungal infections and granulomatous infections.

Fig 6: 55-year-old male with IgG4-related involvement of gall-bladder and biliary...

Fig 10: 18-year-old-male with IgG4 related renal involvement; who presented with...