CSF mimic in the post-operative spine: A pitfall for the unwary 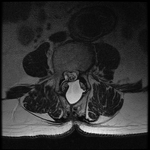 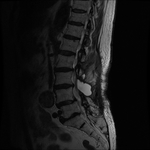 The use of dural sealants to obtain watertight closure after intradural procedures has been standard practice for many years.  In addition to primary closure (which is the gold standard, although not 100% successful) the use of an adjunct to aid the seal and reduce the incidence of post operative CSF leak is increasingly seen as good practice (Haque, 2013).

With autografts (pericranium or small bowel submucosa) the increased morbidity of these superadded operative procedures makes the use of a synthetic substance attractive (Rosen, 2011).

In our institution, we use a polyethylene glycol hydrogel (PEGH) compound called DuraSeal, produced by Coviden.  This conforms to irregular surfaces without affecting underlying tissue viability and is effective at producing a watertight seal (Kim, 2011;  Osbun, 2012).  This substance has FDA approval in the United States (Kim, Osbun).

As described by Tarapore et al in 2011, the PEGH compound (“DuraSeal”) has a high water content, and follows CSF signal on MRI.  After analysis of the signal intensities of DuraSeal compared with CSF, they concluded that “ with T1 and T2 weighted techniques…PEGH…may not be differentiated from CSF” (Tarapore, 2011) or indeed seroma.  In addition, given the site of application, in the clinical setting these imaging findings may be misinterpreted as post surgical CSF leak.  This potential hazard was reported in 2011, but only in the neurosurgical literature.  To our knowledge, this phenomina has not been reported in the orthopaedic or MSK radiology literature.

In our institution, we have indentified 6 post-operative spinal cases in which the early (<6 weeks) imaging of the DuraSeal in the surgical bed mimics CSF.  In each case, the radiology report incorrectly interpreted the case as CSF leak.

In the first case, the patient was taken back to theatre.  Fortunately, in the other cases, the potential for error had been disseminated to the departmental surgical team (although not to any radiologists) and any action based on incorrect imaging intepretation was prevented.