Don’t judge a book by its cover: The many faces of Gout

Fig. 1: Plain radiograph of the knee demonstrates erosions of the inferior aspect of...

Fig. 4: 2D sagittal reconstruction of the knee on bone window settings demonstrates the...

Fig. 14: Plain radiograph of the first metatarsophalangeal joint. Red arrow points to a...

Using a multi-modality approach, the presentation of gout in the axial skeleton, atypical joints and extra-articular locations will be reviewed using cases from a tertiary MSK/Orthopaedic referral centre.

In particular we aim to demonstrate cases of  gout occurring in atypical locations such as the facet joints of the spine, patellar and quadriceps tendon, posterior tibial tendon, peroneal tendon and a typical case involving the MTPJ of the hallux to display common features of gout observed on imaging.

A 60 year old male patient presented with acute on chronic knee pain and swelling. Initial radiograph showed erosions and a dense soft tissue swelling in the projection of the patellar tendon (Figure 1).

Fig. 1: Plain radiograph of the knee demonstrates erosions of the inferior aspect of the patella and the proximal tibia (red arrows) secondary to gouty involvement.

Intra-tendinous tophaceous gout may mimic infectious, neoplastic and other causes of tendinitis. Extra-articular gout may present as tendinopathy, often affecting the tendons of the wrist and Achilles tendon.The patellar tendon is a more unusual location. If patellar tendon pain is associated with a mass, the differential diagnosis should be broadened to include crystalline arthropathy. 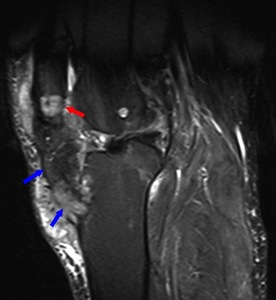 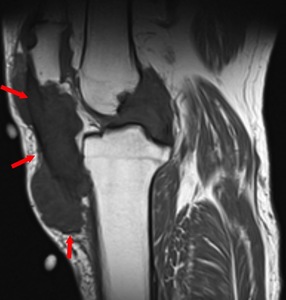 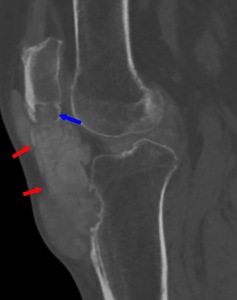 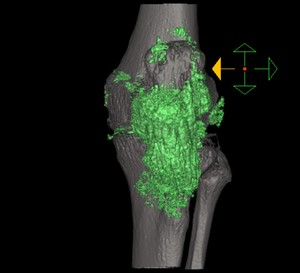 Fig. 5: Coronal colour‐coded, post‐processed 3D rendered image. Monosodium urate deposition is depicted in green, which is seen in the projection of the patellar tendon. 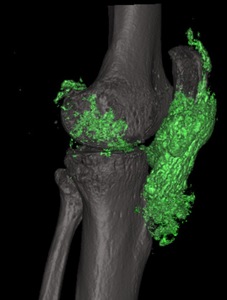 Fig. 6: Sagittal colour‐coded, post‐processed 3D rendered image. Monosodium urate deposition is depicted in green, which is seen in the projection of the patellar tendon.

A 40 year old ultra-marathon runner presented with anterior knee pain worse on extension. A painful swelling was palpated at the superior pole of the patella. In view of this a MRI was performed. A low T1 signal soft tissue mass  was seen within the distal quadriceps extending into the superior aspect of the patella (Figure 7). The mass was slightly heterogeneous and hyperintense on fat saturated sequences (Figure 8). In view of the aggressive appearance of this intra-tendinous lesion, an ultrasound guided biopsy was performed in order to exclude a neoplastic process. The biopsy specimen showed the presence of monosodium urate crystals, confirming tophaceous gout.

Fig. 7: Sagittal T1 weighted MR image of the knee shows a low signal mass associated with the distal quadriceps tendon (red arrows) with erosive change in the proximal pole of the patella. 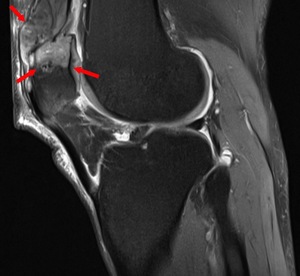 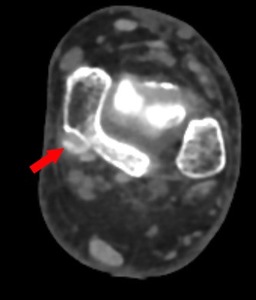 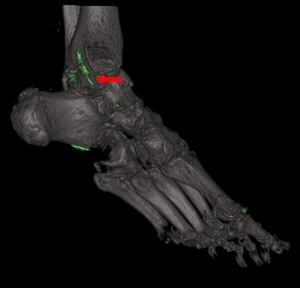 Fig. 10: Colour‐coded, post‐processed 3D rendered image. Monosodium urate deposition is depicted in green, which is seen projected along the course of the posterior tibial tendon sheath. 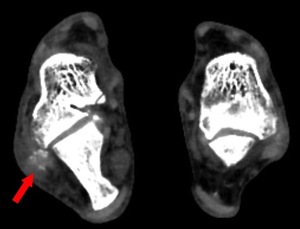 A 65 year old man presented with acute onset lower back and systemically displayed evidence of inflammation/infection. A MRI was performed demonstrating inflammtory changes within a left lumbar facet joint with a small associated epidural collection (Figure 12, 13). Septic arthritis was the presumed diagnosis until a biopsy was postive for monosodium urate crystal depostion. 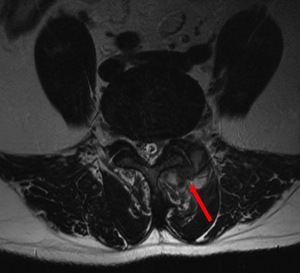 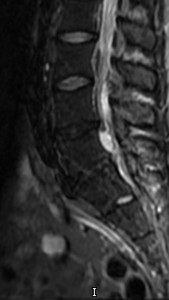 A 50 year old man presented with a typical hostory of severe pain in his big toe with erythema and swelling. As this is the most common presentation of an acute attack of gout this was the presumed clinical diagnosis. A X-ray showed juxta-articular erosions which are typical findings in chronic tophaceous gout (Figure 14). In acute gout initial x-ray findings show soft tissue swelling. In longstanding gout the typical findings are well defined, ‘punched-out’ erosions with overhanging edges, gouty tophi which may be calcified and typically an asymmetric involvement. 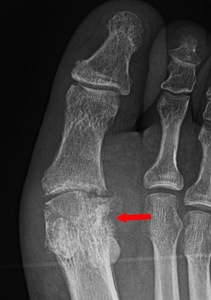 An ultrasound was performed to exclude septic arthritis which is the most important differential of an acutely swollen and tender joint. Ultrasound demonstrates a synovitis with hyperechoic debris in a 'snowstorm' appearance which is quite typical of gout although not specific (Figure 15). Synovitis in gout is most commonly seen in the first metatarsalphalangeal joint, knee, ankle, wrist and second metacarpophalangeal joint.

Fig. 15: Doppler ultrasound of the first metatarsophalangeal joint demonstrates hyperechoic changes in the joint with associated hyperaemia in keeping with acute tophaceous gout

Although the first metatarsophalangeal joint is the most common location for gout we have included this in our review to demonstrate the typical radiographic and ultrasound findings which should be kept in mind when evaluating other less commonly affected joints.