Fig. 1: Example of placement of circular regions of interest (ROIs) in artifact free...

We performed a retrospective study of consecutive patients with intracranial coils who had undergone brain imaging at a Philips dual-layer IQon CT at our centre between November 21, 2017 and April 4, 2019. Patients with and without O-MAR reconstructions were included. The patients (n=38) were grouped and analyzed separately based on if O-MAR reconstructions were available (n=6) or not (n=32). 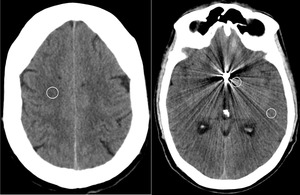 Fig. 1: Example of placement of circular regions of interest (ROIs) in artifact free white matter (left image) as well as proximal and distal to the metal coils (right image) in a patient treated for an aneurysm in the anterior communicating artery.

The ROI's were used to collect mean attenuation values (HU) and standard deviations (SD) in both conventional (CI) and, through spectral diagrams, for monoenergetic reconstructions (VMIs) ranging from 40 to 200 keV with 10 keV increments. Median attenuation and signal to noise-values (HU/SD) were compared. All measurements were performed in axial plane images with a slice thickness of 4 mm. 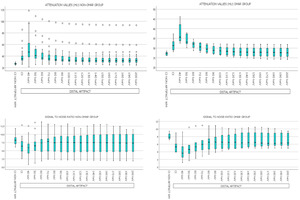 Results of the subjective analysis can be viewed in figure 3. 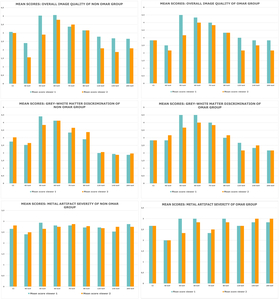 Mean artifact severity score in the non-OMAR group peaked at 50 keV for viewer 1 and at 70 keV for viewer 2. The mean values of those reconstructions were higher than the mean value of the conventional images for both viewers respectively. The interobserver agreement for the evaluation of artifact severity was calculated as a weighted Cohens kappa coefficient and was moderate at 0,57. In the OMAR group, the artifact severity was generally assessed as lower copared to same images without OMAR for all reconstructions (figure 4). 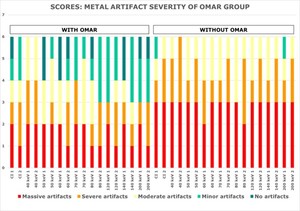