Fig. 3: Heel ulcer and calcaneal osteomyelitis. MRI from the same patient as Fig 1. (A)...

Fig. 10: Osteomyelitis as result of directly spreading cutaneous infection from the same...

Fig. 13: Neuropathic osteoarthropathy . (A) Coronal T1-weighted image and (B)...

Fig. 17: Neuroarthropathy with superimposed osteomyelitis in MRI. (A) Sagittal...

Patients with diabetes are particulary suceptible to these type lesions and these can serve as point of entry for infections.

Ulcers tend to occur in the anatomic sites that are subjected to the highest contact pressures: at the plantar aspect of the first metatarsophalangeal joint and fifth metatarsal head and at the tip of the distal phalanx of the great toe. Hindfoot ulceration is less common than ulceration in the forefoot and predictably occurs at the heel. Midfoot ulcers are rare in the absence of neuropathic osteoarthropathy and occur beneath the cuboid bone [1, 5, 7]. Large (>2 cm) and deep (>3 mm) ulcers are more likely to be associated with infections of the underlying bone [1]. Ulcers typically appear as focal skin interruptions with elevated margins and associated soft tissue defects (Fig 1, 2). In MRI ulcers are detected as hyperintense areas on T2-weighted images, with intense peripheral enhancement on T1-weighted images, a finding indicative of granulation tissue at the base of the ulcer (Fig 3) [5, 14].

Cellulitis represents an acute infection of the dermis and subcutaneous tissues that results in pain, erythema, edema, and warmth. Focal or diffuse soft tissue swelling, which appears as increased opacity within the infected tissue, can be detected using conventional radiography (CR) (Fig 4) [2]. Computed Tomography (CT) demonstrates skin thickening, septation of the subcutaneous fat, and thickening of the underlying fascia [6], as well as homogeneous enhancement after the administration of contrast material.

At MR imaging, skin thickening and edema are seen in both soft-tissue edema and cellulitis, and reticulation of fat is more prominent, with intermediate signal intensity on T1-weighted images and high signal intensity on T2-weighted images. Contrast enhancement is a distinguishing feature of cellulitis and is not seen in diabetes related edema or neuropathic disease [5, 14] (Fig 5). Conventional radiography and CT are useful in gas detection, a finding that may be present in necrotizing infections or caused by gas producer germs (Fig 6). 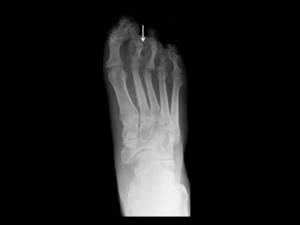 Abscesses often present as a well-demarcated fluid collection with a peripheral pseudocapsule showing rim enhancement on CT [6]. On MRI, contrast enhancement along the wall of the fluid collection and a higher T2 signal intensity are highly suggestive of an abscess (Fig 7). If a sinus tract is present, an ulcer may extend to the level of the adjacent osseous prominence. On contrast-enhanced images, sinus tracts display a “tram-track” pattern of enhancement (Fig 8) [5, 14].
Foreign bodies may be seen in diabetic patients with sensory neuropathy or after surgery. On MRI usually has low signal intensity on both T1- and T2-weighted MR images, and blooming artifact may be seen on gradient-echo images [5]. Conventional radiography and CT are also useful in their identification.

Septic tenosynovitis commonly occurs in the peroneal tendons from a lateral malleolus ulcer and in the Achilles tendon from a calcaneal ulcer. In the forefoot, nearly two-thirds of all tendon infections involve the flexor tendons and are a result of plantar forefoot ulceration [5]. Tendon thickening, hyperintensity on T2-weighted images, and enhancement may indicate infection, but these findings are nonspecific; they also may be seen with other inflammatory, neoplasic or posttraumatic conditions (Fig 9) [5]. 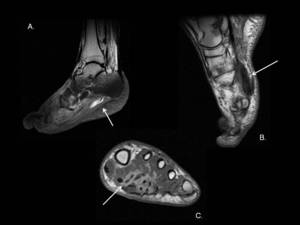 The early and accurate differentiation of osteomyelitis from neuroarthropathy in the diabetic foot has the potential to help reduce the incidence of infection-related morbidities, the need and duration of hospitalization and the incidence of major limb amputation [7]. In addition, it is very important to determine infected from noninfected acute neuroarthropathy because the therapeutic approach will vary. Although bone biopsy is still considered the gold standard, MRI is currently considered the modality of choice in the evaluation of bone marrow changes in the diabetic foot when osteomyelitis is suspected.

Osteomyelitis develops, almost exclusively, by the contiguous spread of infection from skin ulceration at predictable sites, whereas neuroarthropathy is primarily articular [5]. The most common locations are the heads of the metatarsals, phalanges and calcaneus, although any bone can be affected [14] (Fig 10).

The MRI-based diagnosis of osteomyelitis hinges on the identification of abnormal bone marrow signal, typified by hypointensity on T1-weighted images and hyperintensity on fluid-sensitive images (T2-weighted, STIR). Although T2-weighted images are considered the most sensitive, it is the abnormal T1-weighted signal that is more indicative of osteomyelitis because the loss of fatty marrow signal represents infiltration of the bone by the infectious process. The associated appearance of hypointense periosteum separated by a hyperintense layer (representing fluid or pus) from the underlying bone is also strongly supportive of osteomyelitis. Gadolinium-enhanced T1-weighted images demonstrate enhancement of the abnormal bone marrow (Fig  10, 11, 12) [7, 14]. 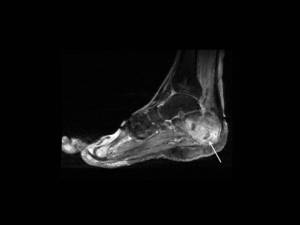 Signs supporting the diagnosis of osteomyelitis are the presence of ulcers, fistulas and abscesses next to the affected bone [14]. The isolated T2 signal abnormality even in the presence of marrow enhancement, suggests reactive bone marrow edema secondary of infection and noninfective entities (as postsurgical changes and artrophathy) [5, 7].

Neuropathic osteoarthropathy usually presents in patients who have had diabetes more than 10 years and have developed symmetric distal neuropathy [7]. Is an aggressive, deforming arthritis results from a combination of repetitive microtrauma and macrotrauma to the articular surfaces, peripheral neuropathy and ischemia with poor healing leads to joint instability, dislocation and resultant deformity [15]. The most often affected joint is the tarsometatarsal or Lisfranc joint [14, 15]. Other joints may be involved including the talonavicular, subtalar and intertarsal joints [8].

The MRI findings in the acute or active stage of neuroarthropathy (AOA) are the most confounding for osteomyelitis. These include soft tissue edema, joint effusions, fluid collections, and periarticular soft tissue enhancement [5, 7, 14].

In the early phase of the acute stage, conventional radiology appears normal, but the MRI shows subchondral bone marrow edema with or without microfracture. The more advanced stage of the acute hyperemic Charcot neuroarthropathy is characterized by edema and swelling of soft tissues and muscles, and edema of bone marrow, without definite bone destruction [8]. The bone marrow edema typically is not restricted to one or two bones, yet is seen in the entire area of pathology, thus the entire midfoot. Bone marrow edema and its enhancement are typically centered in the subchondral bone, suggesting the relation to joint disease (Fig 13) [8, 14].

The chronic or inactive stage is typified by a deformed foot and little bone marrow edema, with the classic constellation of destruction, debris, disorganization, dislocation and sclerosis (Fig 14, 15, 16). 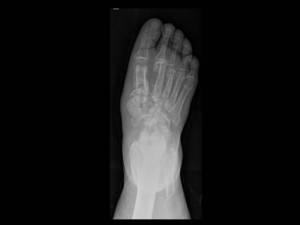 In an uncomplicated neuropathic joint at chronic stage, the bone marrow is typically hypointense on all sequences, compatible with sclerosis, and any abnormal hyperintensity in the bone marrow or cortex should raise suspicion for superimposed infection or recent fractures related to the neuropathy (Fig  17) [7]. Acute neuropathic arthropathy may be superimposed on the chronic form of disease reflecting more recent injury or possibly more acute instability [15].

Due to the clinical importance of differentiating infected arthropathy of the uninfected, several signs have been described in MRI. The presences of fistulas, abnormal subcutaneous fat and thick wall enhancement joint, indicate superimposed infection. However, the preservation of subcutaneous fat, the presence of subchondral cysts and intraarticular bodies indicate arthropathy without infection [5, 8, 14].

Three-phase bone scintigraphy with delayed 24- hours imaging is a very sensitive test but is not specific for osteomyelitis of the foot; however, improvement in diagnostic accuracy was obtained when It was supplemented with leukocyte-labeled scintigraphy. These modalities used conventional planar imaging, which posed a limitation in identifying the precise site of osteomyelitis or even determining whether or not an infection is within bone or soft tissues, owing to their relatively low spatial resolution and lack of anatomic specificity.

The SPECT/CT imaging protocol of the foot is a non-invasive and effective technique that combines various important pathophysiologic SPECT data derived from bone scintigraphic, leukocyte-labeled scintigraphy and bone marrow scintigraphy, with CT to accurately diagnose foot infection in addition to exact registration of these functional images with distinct anatomic landmarks [9]. SPECT/CT represent a potential tool for differentiating between bone and soft-tissue involvement and by more precisely defining the extent of the disease, especially in osseous structures of the mid and hindfoot (Fig 18, 19, 20) [10, 11]. Their limitations lie in the avaibility and the accuracy for the evaluation of small anatomical structures such as forefoot bones. 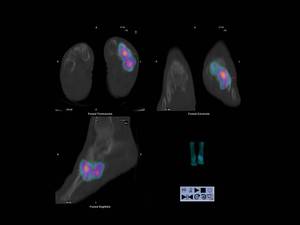 18F-FDG, a nonspecific indicator of increased intracellular glucose metabolism, accumulates in sites of active malignancy as well as in infectious and inflammatory processes. The PET component identified FDG-avid foci in sites of acute infection which were precisely localized on fused PET/CT images allowing correct differentiation between osteomyelitis and soft-tissue infection [12]. Quantification of radiotracer activity using maximum SUV may potentially help to differentiate areas of infection from those of inflammation. The SUV max in the Charcot's lesions is lower than of osteomyelitis supporting the role of FDG-PET in the setting of Charcot neuroarthropathy where this mechanism is superior to other modalities in making such distinction [13]. However, given the fact that the reproducibility of SUV measurements between different institutions is suboptimal and the patient population varies from each institution, a single SUV alone is not sufficient for diagnosis.

The initial screening modality is a radiograph of the foot in three directions (dorsoplantar, lateral and oblique). Both feet should be studied, to detect and compare metabolic disturbances and subtle changes [8]. The development of classic radiographic features of osteomyelitis, may lag behind the clinical manifestations by 10–20 days, and radiography is relatively insensitive to small amounts of bone destruction [1]. Although patients may present early in the acute active phase with normal radiograph, in Charcot neuroosteoarthropathy an advanced early stage can be diagnosed on a radiograph [8].

We considerer that the radiographs provide important anatomical information and It can be used as a control exam for further follow-up given its wide availability and low-cost realization.

The second step in analyzing the diabetic foot is MRI. A minimum of two planes should be adquired. For the forefoot and metatarsal, coronal images should be included. For flexed or deformed toes, sagittal images are very useful. Axial images provide excellent visualization of the bones of the midfoot. Sagittal images are optimal for evaluation of deformities of the plantar arch [15]. The first consideration should be the geographic distribution of pathology. A midfoot, subchondral and periarticular distribution of findings in the absence of a contiguous focus of skin disruption, most commonly at the Lisfranc or Chopart joints, would strongly support neuroarthropathy. But a forefoot focus of abnormal bone marrow away from the subchondral surface and adjacent to a skin ulcer, abscess or sinus tract would be indicative of osteomyelitis [7]. In cases of chronic osteoneuroarthropathy the parameters of bone marrow abnormality have been correlated with acute onset of infection include diffuse bone marrow abnormality, progressive subarticular enhancement, loss of subchondral cysts  and the presence of the MRI ‘‘ghost sign.'' [7]
The benefit of MRI in diabetic foot lies in its ability to detect early changes in the bone marrow signal, delineating the precise extension of pathology with higher sensitivity and specificity than the remaining diagnostic modalities [7].

SPECT/TC is indicated in cases with doubtful findings of bone involvement in MRI or problematic cases of infection superimposed to neuroarthropathy or degenerative changes.