Fig. 1: Diagram depicting basic process of shear-wave based ARFI or VTQ mode of US...

Breast cancer has become the most common of all cancers and is the leading cause of cancer deaths in women worldwide, accounting for >1.6% of deaths. In India, breast cancer is set to overtake cervical cancer as the most common cancer among women by 2020.[1] For successful management of breast cancer, early and accurate detection is very important. Mammography and conventional ultrasound (US) are the main imaging modalities which have shown the highest sensitivity in detecting breast cancer. However, both methods have their own limitations. In dense breast, mammography has high false negative results, whereas US is highly sensitive in detecting breast lesions but specificity is poor. The Breast Imaging Reporting and Data System (BI-RADS) with US provides standardized lesion categorization with high predictive values. The probabilty of BIRADS 3 and 4 lesions varies between 2-94% [2-3]. Now with addition of  strain elastography to the conventional US, the specificity increases as the yield of information is not only based on morphologic criteria but also on the tissue elasticity of the masses. But, it has significant interobserver variability as it is a qualitative technique which  requires external compression to produce an elastogram images. [4,5]

Recent introduction of new elastographic technique, Acoustic Radiation Force Impulse (ARFI) imaging which employs a vertically directed short duration high intensity acoustic impulse to induce a horzontally directed elastic shear wave, which propagates through the tissue in the region of interest. The shear wave velocity is detected by the detection pulses which is expressed in meters per second (m/s), and thus correlates with tissue elasticity as the shear wave velocityis proportional to the square root of stiffness.[Fig 1.] 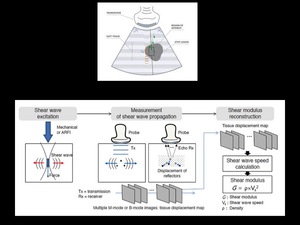 The primary aim of this study was to assess the diagnostic performance of Shear Wave Elastography (SWE) or ARFI in differentiating indeterminate breast masses with morphologic features of BI-RADS 3 or 4, using histology as reference standard.