Fig. 3: Phase-contrast sequence in sagittal plane a) Re-phased image in which there is...

Fig. 4: phase-contrast sequence in axial plane perpendicular to the aqueduct of Sylvius...

Fig. 7: Axial T2-WI in different cases a) MRI of 7-month-old girl with hydrocephalus...

Fig. 12: The value of post-contrast T1-WI in different cases with hydrocephalus. a,b)...

Fig. 18: MRI of 3-month-old boy with Dandy-Walker malformation and hydrocephalus, a)...

Fig. 23: Axial T2-WI of 6-month-old girl with hydrocephalus and non-functioning... 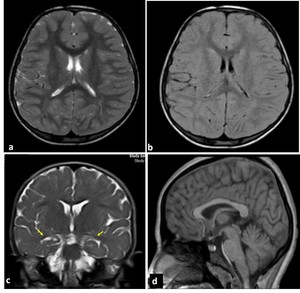 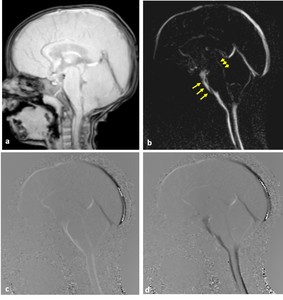 Fig. 3: Phase-contrast sequence in sagittal plane a) Re-phased image in which there is visible background; b) magnitude image in which the flow is bright with suppressed background; c,d) Phase image demonstrates the to-and-fro (pulsatile) bright and black flow of CSF throughout the cardiac cycle. Note the CSF flow in the prepontine-premedullary cisterns (long arrows) and the aqueduct of Sylvius (short arrows)
References: Mohammad S 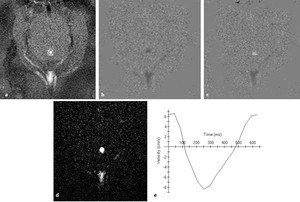 ·       Axial, coronal T2-WIs and FLAIR are analysed first to document ventriculomegaly and to search for any associated structural abnormalities and white matter signal intensity alterations. 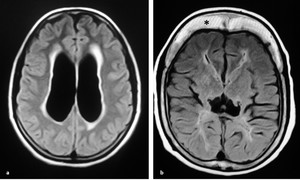 ·       Coronal T2WI demonstrates commensurate dilatation of the temporal horn with the lateral ventricles associated with rounding of the lateral angles and medial displacement of hippocampus in cases of hydrocephalus.  Effacement of pericerebral CSF spaces above the level of obstruction is also demonstrated. However, in cases with ventriculomegaly ex-vacuo, the temporal horns, although large, are small compared to the bodies of the lateral ventricles; they retain their normal shape and the hippocampi are not displaced medially ( Fig. 7 Fig. 9 ). In addition, the pericerebral spaces remain patent ( Fig. 10 ). However, in paediatric patients, assessment of pericerebral CSF spaces can be misleading as both atrophy and hydrocephalus can cause enlargement of the ventricles and sulci without effacement. Moreover, the size of the ventricles and subarachnoid spaces have variable size over the first 2 years of life. So, knowledge of the infant’s head size is essential; a large head or too rapidly enlarging head suggests hydrocephalus, whereas a small or diminishing head circumference is more compatible with atrophy [4,8]. 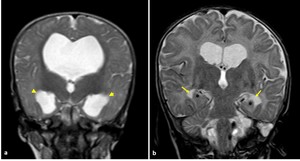 Fig. 9: Coronal T2-WI in two different patients a) MRI of 7-month-old girl with hydrocephalus showing commensurate dilatation of the temporal horns (arrowheads) with the lateral ventricles; b) MRI of 5-month-old boy with brain atrophy, the temporal horns (arrows), are small compared to the bodies of the lateral ventricles; they retain their normal shape and the hippocampi are not displaced medially (asterisk)
References: Mohammad S

·       3D-DRIVE sequence is analysed in sagittal plane. Widening of the third ventricular recesses (chiasmatic, sellar and pineal recesses) and the downward bulge of the floor of third ventricle were used as reliable signs for differentiating hydrocephalus from other causes of ventriculomegaly (Fig. 10 ) [4,7]. Axial and coronal reconstructions can be obtained for accurate determination of the site and the cause of obstruction. The shape of the obstructed/ stenosed aqueduct (either tubular narrowing, focal obstruction/ stenosis, associating proximal funnelling) are described. Presence of syenchiae in the ventricular outlet foramina and basal cisterns can be demonstrated ( Fig. 11 ) [8]. 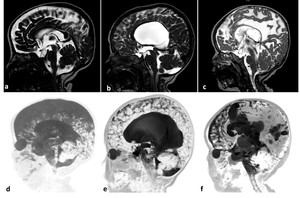 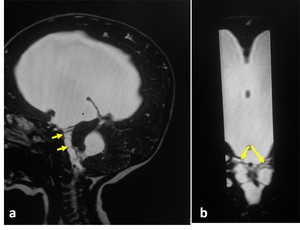 ·       Contrast injection is crucial in cases with intracranial neoplasms or in suspected inflammatory process ( Fig. 12 )

·       A consensus classification of hydrocephalus has been proposed to relate most cases of hydrocephalus to obstruction to CSF pathway reflecting the surgical approach to hydrocephalus that aims to divert the CSF between the site of production and absorption [10, 11]. Obstruction can be encountered in the aqueduct of sylvius, fourth ventricular exit foramina, foramen of Monro ( Fig. 13 ) or secondary to synechiae at the ventricles or basal cisterns. 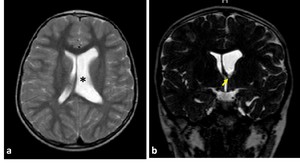 ·       Aqueduct of Sylvius is the most prevalent site of obstruction [7,12]. This can be related to its narrow calibre.  This can occur secondary to congenital stenosis, web or post inflammatory adhesions and external compression. The small fourth ventricle with dilated third and lateral ventricles out of proportion of cortical atrophy were described as criteria that could suggest aqueduct stenosis. Though, these are non-reproducible parameters [13]. 3D-DRIVE can precisely demonstrate the stenosed aqueduct (Fig. 14 ). In addition, phase-contrast imaging support the diagnosis of CSF flow obstruction at the level of aqueduct which aids in the diagnosis of aqueduct stenosis if obstructive hydrocephalus is clinically or radiologically suspected ( Fig. 15 ).

·       Benign idiopathic external hydrocephalus is also known as benign enlargement of subarachnoid spaces in infancy. It is characterized by macrocephaly with dilatation of the anterior subarachnoid spaces and ventricular system to a lesser extent. The extra-axial CSF spaces should have CSF signal in all pulse sequences and be traversed by the bridging veins (Fig. 7). These features should be fulfilled in order to be differentiated from prominent extra-axial spaces secondary to haemorrhage especially in patients who have macrocephaly associating glutaric aciduria type 1 ( Fig. 17 ) [15].

Fig. 17: Axial T2-WI (a) and FLAIR (b) of 5-month-old girl with glutaric aciduria type I and macrocephaly showing ventriculomegaly with subdural collection (asterisk)
References: Mohammad S

It appears as Infra or retrocerbellar arachnoid cyst associated with tetraventricular hydrocephalus. Phase-contrast study reveals lack of communication between the cyst and the posterior cervical subarachnoid space (Fig. 19). 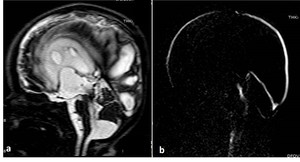 It represents caudal displacement of the cerebellar tonsil through the foramen magnum causing plugging of CSF pathway (figure 20). Patients who are most responsive to surgery are better selected according to the degree of CSF flow obstruction, demonstrated by phase contrast study, rather than the degree of cerebellar tonsil ectopia [2, 17].

Phase-contrast and 3D-heavy T2 (3D-DRIVE) sequences have high confidence in the assessment of the flow through the floor of the third ventricle with proper identification of ventriculostomy malfunction (Fig. 21 , video Fig. 22)[18]. 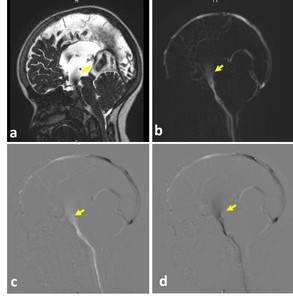 CT of the head and clinical symptoms, including headache, vomiting, altered sensorium, feeding difficulty, and fever, remain the main stay for the diagnosis of shunt malfunction [19]. However, clinical symptoms are often vague with equivocal radiological findings, in addition to the burden of frequent radiation exposure. Ventricular enlargement compared to prior examinations is the primary sign for shunt malfunction. However, the shunt failure can occur without definite ventriculomegaly. Secondary signs of acute shunt malfunction include transependymal permeation of CSF and pericatheter edema. Subgaleal fluid collections can be encountered (Fig. 23 ) [20].  Rapid brain MRI protocols have been utilized based on single shot T2-WI [21].  Recently, it was documented that phase-contrast sequence can be useful in the assessment of functional status of the VP-shunt through velocity measurements across the shunt tube [22]. 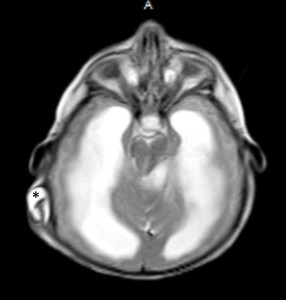