Barium swallow tests in the evaluation of esophageal dysphagia

Esophagography provides not only anatomic but also functional information about the pharynx, esophagus, gastroesophageal junction (GEJ) and gastric cardia. It allows the evaluation of esophageal motility and assessment for gastroesophageal reflux. Usually a moderately low-density barium suspension is used. Whenever there is a suspected perforation, a water-soluble contrast should be used, as it has no deleterious effects on the mediastinum or peritoneal cavity.

The normal esophagus has smooth longitudinal folds and peristaltic waves move the bolus down the esophagus.

Presbyesophagus encompasses the manifestations of degenerating motor function in the aging esophagus. It is typically seen in patients with more than 80 years.

Imaging findings usually involve the distal esophagus. There may be a decreased frequency of normal peristalsis, tertiary contractions, esophageal dilatation and anomalies of the lower sphincter relaxation.

Diffuse esophageal spasm is a motility disorder in which there are multiple spontaneous and uncoordinated esophageal contractions. It affects more commonly patients >50 years

The classic finding of a “corkscrew” esophagus, with normal peristalsis being interrupted by many tertiary contractions, is rare.

Most commonly there are nonperistaltic contractions, usually in the distal two-thirds of the esophagus.

In achalasia there is a loss of the normal primary peristalsis and an incomplete lower sphincter relaxation, leading to esophageal dilatation with tapering of its inferior segment.

In the late stages of the disease there may be pooling or stasis of barium in the esophagus, as it becomes atonic. It may also become dilated and tortuous, with an appearance resembling the sigmoid.

It is important to be aware of the possibility of pseudoachalasia, in which the esophagus is dilated but the distal narrowing appears irregular, since the cause of this narrowing is primary or metastatic tumor. 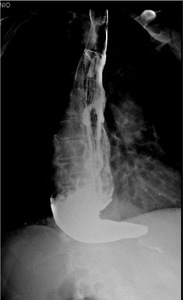 The esophagus is the most common site of gastrointestinal involvement in scleroderma, being involved in 80% of cases.

There is dysmotility of the lower esophagus, corresponding to the region of smooth muscle, leading to luminal dilatation and gastro-esophageal reflux due to reduced sphincter tone. Associated gastroesophageal reflux and esophageal stasis may lead to the development of a peptic strictures. 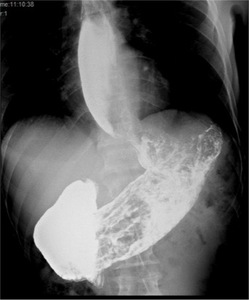 The most common type of hiatus hernia is the sliding one, with the gastro-esophageal being displaced above the esophageal hiatus.

On fluoroscopy, the gastroesophageal junction line is located more than 2 cm above the diaphragm. 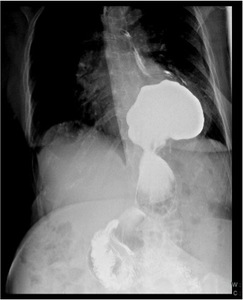 Fig. 7: 78 year old female patient with dysphagia. Esophagography shows a hiatal hernia, with the gastro-esophageal being displaced above the esophageal hiatus.

Patients usually present with increasing dysphagia, initially to solids and progressing to liquids as the tumour increases in size, obstructing the lumen of the esophagus. However most patients have advanced disease at the time of diagnosis, with overall low survival rates.

Infiltrating lesions appear as an irregular luminal narrowing with mucosal nodularity or ulceration and abrupt margins. 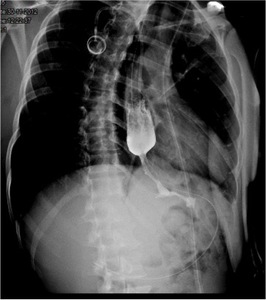 Extrinsic compression may be due to mass effect from adjacent tumors, masses or adenopathy, cardiovascular pathology our musculoskeletal abnormalities. 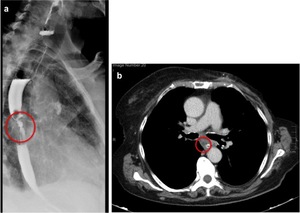