Fig. 3: The layer structure of the gastrointestinal tract by the endoscopic...

Fig. 14: Differential diagnosis between epithelial and submucosal lesions as seen as on...

The stomach is divided into the cardia, fundus, body, antrum, and pylorus.
The stomach wall is made up of several layers of tissue: 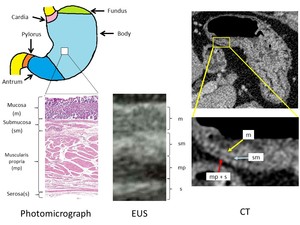 Determination of Mass Origin in the GI Wall with CT

CT imaging are of limited value due to their inability to allow differentiation of GI wall layers.

CT can be helpful in characterizing a tumor by using contrast enhancement, in determining the site of origin of a mass lesion, in delineating the full extent of a tumor, and in detecting local invasion and distant metastases.

CT may be helpful in distinguishing between epithelial and subepithelial masses.

Subepithelial masses or masslike lesions have varying degrees of enhancement.

This layered appearance is more commonly seen during the arterial phase.

Intramural subepithelial masses appear at CT as well-defined smooth-surface masses with intraluminal or extraluminal growth; the overlying mucosal layer is generally intact, with the exception of the focal ulcerated area.

The identification of mucosal changes such as mucosal ulceration, thickening, and irregularity at CT may be important in differentiating epithelial masses from subepithelial masses.

The first choice for examining submucosal lesions in the upper GI tract.

Important application of EUS is to stage GI malignancy, also to differentiate the type of submucosal tumors by their original layers.

The sensitivity of cytological samples achieved through EUS-FNA has been reported to be 88-91% and the specificity was 100% for the diagnosis of malignant lesions.

Standard EUS is able to show 5 layers of the gastrointestinal wall of alternating hyperechoic and hypoechoic layers, with higherfrequency probes, 7 or more layers can be seen(Fig. 3). 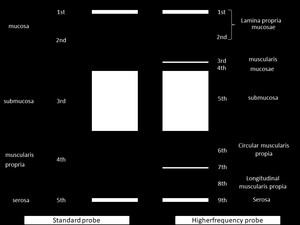 Fig. 3: The layer structure of the gastrointestinal tract by the endoscopic ultrasonography

A variety of neoplastic and nonneoplastic condition arising  from deeper layers of the wall of the GI tract, the overlying mucosa is not involved.

In the case of CT, MRI and EUS, the term submucosal tumor (SMT) is really a misnomer.

Because lesions in this category do not necessarily arise or confine themselves to the submucosa.

Any growth underneath the mucosa of the GI tract whose etiology cannot readily be determined by lumenal diagnostic endoscopy or barium radiography is called an SMT.

The overlying mucosa usually appears smooth and normal at endoscopy.

The majority of subepithelial masses do not cause symptoms and are discovered incidentally during endoscopic or radiologic examinations.

Large submucosal neoplasms may outgrow their blood supply, ulcerate through the mucosa, and present with GI bleeding.

Firm subepithelial masses may also present with obstructive symptoms, especially if they are located near the cardia, the pylorus, or the ileocecal valve. 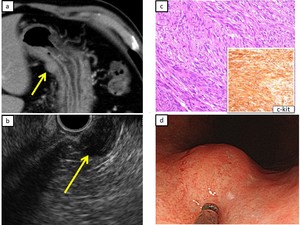 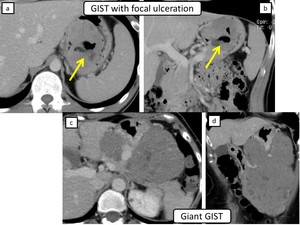 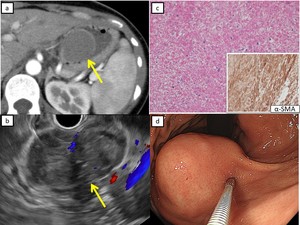 Fig. 6: Leiomyoma a:Axial contrast-enhanced CT image shows a leiomyoma(arrow) in the body of the stomach, with intact enhancing mucosa. b:An EUS image of a gastric leiomyoma depicted as a hypoechoic solid mass in body of stomach. c:Leiomyoma shows bundles of elongate cells with eosinophilic cytoplasm and oblong nuclei. The tumor cells was positive for α-smooth muscle actin (α-SMA). d:Endoscopic image shows that the mass has smooth, overlying mucosa. 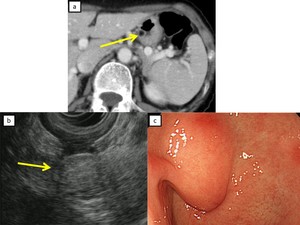 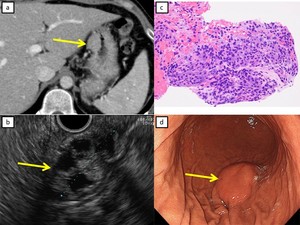 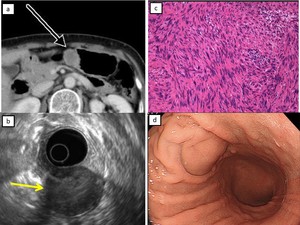 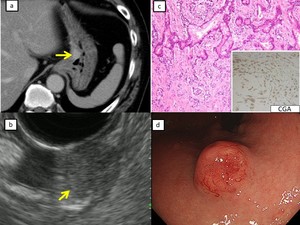 Fig. 10: Carcinoid Tumor a:Axial contrast-enhanced CT image shows type 1 gastric carcinoid, with enhancing polypoid lesions. b:EUS image revealing GI stromal tumor, deriving from the third layer of the gastric wall. c:At greater magnification, the nests of carcinoid tumor have a typical endocrine appearance with small round cells having small round nuclei and pink to pale blue cytoplasm. The tumor cells was positive for Chromogranin A (CGA). d:Endoscopic image shows that the mass has smooth, overlying mucosa in the body of stomach. 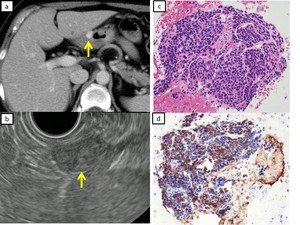 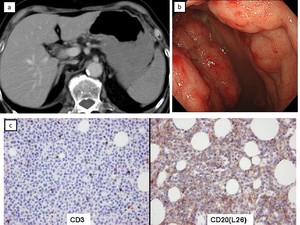 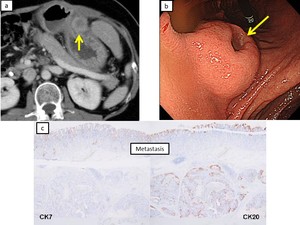 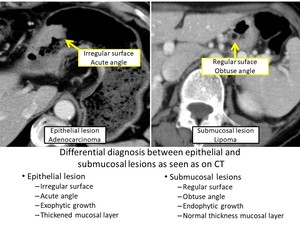