Fig. 7: Schematic view of arterial vascularization of the penis. The dorsal artery of...

Fig. 17: Cavernography-CT based Classification of Anomalous Venous Drainage in Erectile... 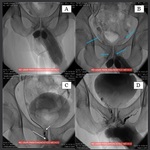 Fig. 18: Schematic view of the complex venous drainage of the penis.

The penis is composed of three cylindrical structures of erectile tissue: two dorsal corpora cavernosa and a ventral corpus spongiosum containing the penile urethra. The spongiosum is smaller proximally but expands distally to form the glans penis.

The corpora cavernosa contain sinusoidal tissue which is markedly distensible and is essential to the erectile process. A tough, non-distensible fibrous capsule, the tunica albuginea, invests the corpora cavernosa, with a much thinner layer covering the corpus spongiosum. There are two layers of fascia enveloping the shaft of the penis beneath the skin. The dartos fascia is superficial and is in continuity with Scarpa’s fascia of the abdomen and the dartos fascia of the scrotum. Deep to the dartos fascia lies Buck’s fascia, which covers the corpora cavernosa and corpus spongiosum and attaches posteriorly to the suspensory ligaments of the penis, allowing the erect penis to achieve a horizontal or greater angle Fig. 6 . 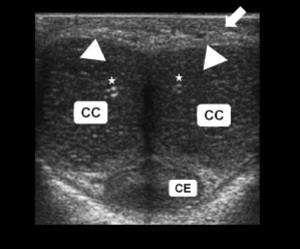 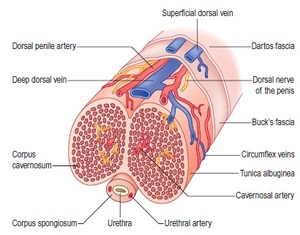 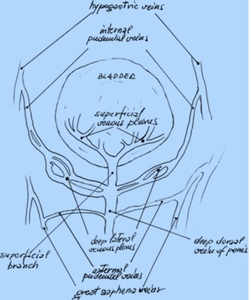 - Patients with no satisfactory reponse to PDE-5 inhibitor treatment.

- Young patients that are candidates to arterial reconstructive surgery or endovascular therapies of venous-leaks.

- Pre-assessment of patients due to undergo revascularisation surgery

following penile trauma, and to document vascularity prior to

Prostaglandin E-1 (PGE-1/Alprostadil/Caverjet®) is the the most widely used agent for pharmacological stimulation of the penis. The normal dosage of PGE-1 is between 10 and 20 μg. Practice varies, but most commonly 20 μg is administered at the outset of the test. PGE-1 is widely reported as a safe treatment but there is a small risk of priapism (less than 1%).

Papaverine, the second most commonly used stimulant, has a reported incidence of iatrogenic priapism of up to 18%.

In patients with an erection lasting longer than 4 hours we recommend to come back to our institution and access to an on-site urology opinion to ensure prompt treatment if necessary.

The stimulated CDUS examination should be performed in a setting that offers patient privacy with little possibility of interruption. A high-frequency linear transducer is required. Intra-cavernosal injection of PGE-1 is performed with a small-bore needle (typically 25-30G). The ideal injection site is between the proximal and mid thirds of the shaft at the dorsolateral aspect. Following injection of the vasoactive substance the angle-corrected velocity of either the left or the right cavernosal artery is recorded at 5-minute intervals from baseline up to 30 minutes. Peak systolic velocity (PSV), end diastolic velocity (EDV) and resistive index (RI) values are then

Some studies have shown that hemodynamic measurements vary depending on the location of the transducer. Those done at the “crus” (at the level of the peno-scrotal junction) may be significative for a better detection of veno-occlusive dysfunction (VOD),whereas an evaluation at “mid penis” (1/2 distance between peno-scrotal junction and coronal sulcus), may be useful to diagnose better an arterial insufficiency (AI) Fig. 9.

Fig. 9: PGE-1 Stimulated CDUS of penis in Erectile Dysfunction Tecnique. Left: Injection of 20 micrograms of PGE-1 with 30 needle inside the corpora cavernosa. Right: Colour flow Doppler ultrasound of the cavernosal arteries should be performed with the probe positioned at the base of the penis on the ventral surface. The angle for Doppler analysis needs to be optimised (<60°) with box-steering, angle correction and orientation of the probe to ensure reproducible, valid measurements.
References: Berrkhim BM. Doppler Duplex Ultrasonography of the Penis. J Sex Med 2016;13:726e731

Before injection of the stimulant, a detailed B-mode US imaging is required to assess the anatomy, the appropriate site for injection, the presence of fibrotic plaques, arterial calcification or tunica disruption. The cavernosal arteries range in diameter from 0.3 mm in the flaccid state to 1.0 mm during erection. The PSV of cavernosal artery in the flaccid penis is 10-15 cm/s  Fig. 10. 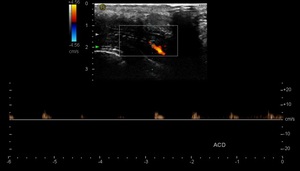 A PSV of ≥35 cm/s is unequivocally normal, whilst a PSV of <25 cm/s following adequate stimulation indicates definite arterial insufficiency. DDVV > 5 cm/s and RI <0,75 are associated.  Fig. 12

Intermediate values are not specific and in this group sildenafil is often used as some will have mild to moderate arterial insufficiency and may benefit. Secondary diagnostic criteria for arteriogenic ED include asymmetry of 410 cm/s in PSV, an increase in the diameter of the cavernosal artery by 75% postintracavernosal injection, focal stenosis in the cavernosal artery and retrograde arterial flow. 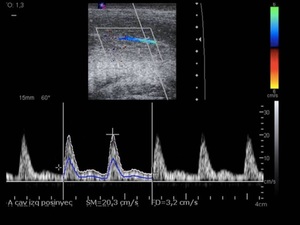 Ultrasound may be used to diagnose veno-occlusive dysfunction in

patients with normal arterial inflow. Having established a normal

arterial response with a PSV >35 cm/s, an EDV >5 cm/s  and DDVV < 5 cm/s is usually accepted as the level above which a venous leak is present. RI may be used as an alternative measure for the diagnosis. RI<0,75 with normal PSV is also regarded as diagnostic of a venous leak.  Fig. 13. 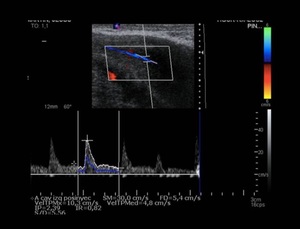 False Venous Leak concept: Anxiety following injection of PGE-1 may lead to a false positive result for venous leak due to elevated adrenergic tone. Increase levels of adrenaline prevent complete relaxation of the sinusoidal smooth muscle in the corpora cavernosa and result in a failure of the normal veno-occlusive mechanism required for an erection. This effect can be reduced by the use of Phentolamine (alfa-adrenoreceptor antagonist) injection in the corpora cavernosa. Many authors recommend that intra-cavernosal phentolamine is necessary before a venous leak can be diagnosed by CDUS assessment in the younger patient.

Patients with PSV <25 cm/s, EDV >5 cm/s, DDVV >5 cm/s and RI < 0,75 reflects both arterial inflow insufficiency and venous leak.  The diagnosis of mixed arterial and venous ED cannot be made using duplex Doppler sonography because venous competence cannot be assessed in a patient with arterial insufficiency. In this group of patients, cavernosography and arteriography may be required.  Fig. 14. 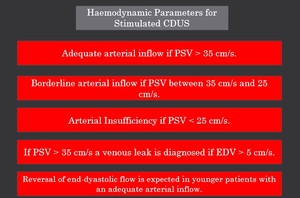 Cavernosography with cavernosometry remains the diagnostic reference standard for the diagnosis of venous leak, as this technique measures outflow resistance without the need for adequate arterial inflow as well as mapping the sites of incompetence. Virag R et al proposed a new classification  Fig. 17 of anomalous venous drainage based on computed tomography cavernography, after contrast media intracavernous injection  under pharmacological stimulation. Fig. 16. 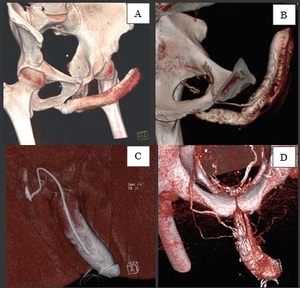 Role of Interventional Radiology in the treatment of venous-leak. Endovascular embolisation therapy.

In the last few years the role of interventional radiology in the management and treatment of veno-oclusive erectile dysfunction has become an alternative to restore sufficient penile erection using selective embolization of insufficient veins. It has been clinically studied as an alternative to invasive surgical treatment. Success of the interventional approach makes this procedure an attractive treatment option, as it  offers more long-term efficacy compared with nonsurgical treatments and is less invasive and more cosmetically pleasing than surgical option.

At our institution the embolisation procedure is performed using a femoral or braquial venous approach. After inserting a 5F sheath, a 4F diagnostic catheter is used to evaluate the individual venous anatomy.

First the internal iliac vein was intubed and the catheter was then placed into the internal pudendal vein. A second selective embolisation catheter system was inserted through the diagnostic catheter into the target vessel. We always try to get as close as possible to the dorsal penile vein confluence point into the venous prostatic plexus. After the ideal position of the embolisation system is confirmed , we use coils and a mixture of N-butyl-2-cyanoacrylate tissue adhesive and lipiodol at a 1:2 to 1:3 ratio.  The application was performed using valsalva’s manoeuver to prevent central embolisation or a pulmonary embolism. After embolisation, the result (complete embolisation/partial embolisation) is confirmed by contrast media injection. If necessary, the procedure is repeated until the target vessels were completely embolised. After retrieving all systems, the patients received a compression dressing for 4 h and were maintained under observation for this time. Hospitalisation was not required.

All of the patients had at least a six month (range 6 month to 24 month) postinterventional follow up. Postinterventional evaluation included physical examination and report of therapeutic response. Fig. 19,  Fig. 20. 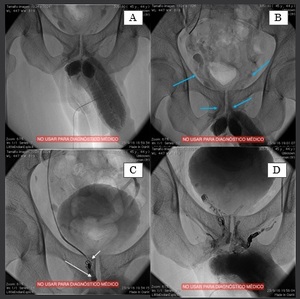 Fig. 19: Case 1. Patient with veno-oclusice erectile dysfunction. A- Cavernography after PGE-1 injection in corpora cavernosa reveals a type B venous-leakage at he level of deep pelvic veins/periprostatic venous plexus on both sides (arrows in B) B- Type B venous leakage with abnormal outflow towards deep pelvic veins and periprostatic venous plexus bilaterally (Arrows). C- superselective retrograde venous angiography of right sided dilated venous periprostatic plexus and embolisation with coil (shor arrow) and glue (histoacryl-lipiodol)(long arrow). D-Control cavernography after complete embolisation of both sides with filling of the target vessel system. There is no venous-leakage. Technical sucess was achieved. 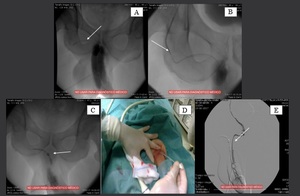