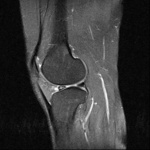 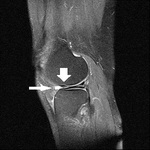 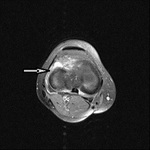 Fig. 5: Axial images of the same patient of figüre 4

To asses accompanience of  lateral meniscus tears with anteriorly located parameniscal cysts in patients and evaluate  the morphology and frequency of this condition.

Meniscal injuries are common in young population due to  their relatively high sporting occupancies rather  than olders .It has  been observed  a second peak of incidence in elderly persons older than 55 years;which is  secondary to a degenerate meniscus being susceptible to injuries with minor trauma. (1)

Meniscal tear incidence may be as high as %0.6  population with a 2 to 4 times male predominance(3). Age of injury peaks at 20–29 years  and children younger than 10 years  has no complaints of  meniscal tears in normal morphological and and genetic state.(2)

MRI is the modality of choice when a meniscal tear is suspected, with sagittal images being the most sensitive(4)

Medial meniscal tears occur often and based on mainly to degenerative process , lateral  meniscal tears tends to be with discoid  meniscus and  occur at  younger  age.(1,2)

Partial meniscectomy (removal of the torn section) is one of the most commonly performed orthopaedic surgical procedures.(1,3)

In older patients, tears are generally due to degeneration associated with ageing and tend to be horizontal *

Cysts have been reported most frequently in 20‐30 year old males(7,8)

The most common current theory of cyst development is they result from extrusion of synovial fluid through an adjacent meniscal tear(8,9)

These cysts occur about twice as often in the medial meniscus and may or may not be confined to the meniscus.When seen outside of the meniscus they become larger and easily be palpated (6)

Parameniscal cysts of the lateral meniscus are more commonly palpable with 20‐60% of lateral cysts being detectable, while only 6% of medial cysts are palpable. Sizes may range from 0.1–8.0 cm, with an average size of 1–2 cm.(8,9)

Until recently, clinicians believed cysts of the lateral meniscus were more common than cysts of the medial meniscus. Authors of recent studies utilizing advanced imaging techniques and arthroscopic visualization estimate that 59‐66% of cysts occur medially, while 34‐41% occur laterally.(8,10)

*All of our patients have  had horizontal tear and in young age contrary to that study.