Low back pain: from diagnosis to treatment

The lumbosacral spine is the source of pain, suffering, and disability more frequently than anyother part of the body. When low back pain does not improve with conservative management, the cause of the pain must be determined before further therapy is initiated. After a symptomatic structure has been identified, therapeutic spinal injections may be administered as an adjunct to conservative management, especially in patients with inoperable conditions.

The intervertebral disc is interposed between the vertebral bodies, and consists of a central gelatinous nucleus pulposis, a surrounding dense annulus fibrosis, and the cartilaginous vertebral end plates capping the adjacent vertebral body surfaces. 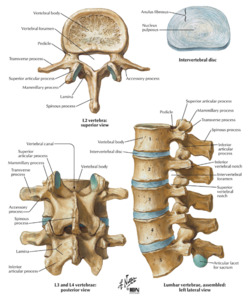 The posterior ligaments of the lumbar spine consist of the interspinous, super-spinous, and intertransverse ligaments, which ones are not substantial structures and add little to lumbar spine stabilization.

The ligamentum flavum courses between adjacent lamina, providing some resistance to flexion and a distinct elastic smooth surface along the dorsal aspect of the vertebral canal. 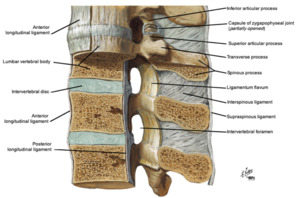 NERVE SUPPLY OF THE LUMBAR SPINE

The nerve supply to the lumbar paravertebral muscles is extensive. Dorsal and ventral nerve roots join to form the spinal nerve, which subsequently divides into two rami: 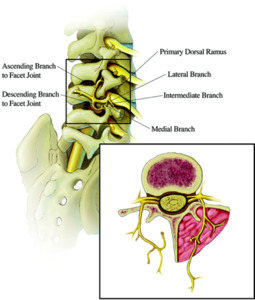 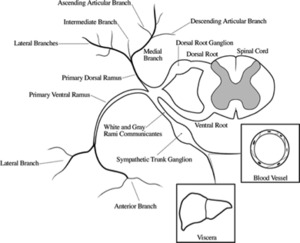 The vast majority of low-back pain is mechanical in nature and is usually related to spinal degeneration, or subclinical episodes that are aggravated intermittently by episodes of trauma. This ‘degenerative cascade’, as described by Yong-Hing and Kirkaldy-Willis, produces degenerative joint changes in the articular cartilage of the facet joints, loss of hydration of the intervertebral disks with concomitant loss of stability and resistance to torsion, eventually leading to radial tears in the annulus. These annular tears allow herniation of the disc material out of the disc into the vertebral canal and onto the adjacent nerve root, causing the symptom of ‘sciatica’ or pain in the distribution of that involved nerve root. The damaged disc also releases neuropeptide, phospholipase A2, and inflammatory peptides, further irritating the nearby neurological structures. 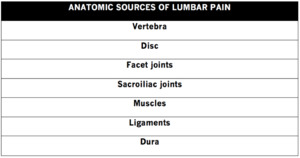 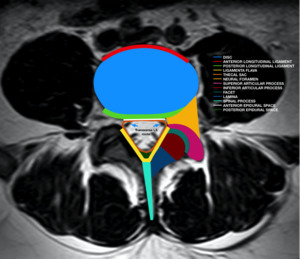 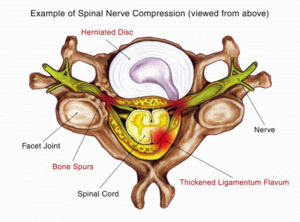