Stone composition and vascular calcifications in patients with nephrolithiasis 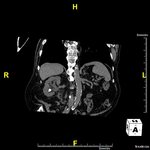 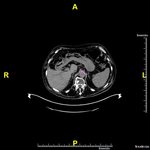 We performed a cross-sectional study with 180 patients underwent at least one stone composition analysis from January 01 2015 to May 30 2018.

The original dataset was linked with the imaging database to identify those patients with at least one abdominal CT scan examination during the period of interest.

For each patient we considered:

The AAC was assessed on unenhanced abdomen multi-detector CT scans performed at the level of the abdominal aorta; all the acquired data were, therefore, analyzed on a dedicated off-line workstation applying the software developed for the coronary artery calcium score (CASC, TeraRecon Inc., Aquarius iNtuition, San Mateo, CA). The results were used to compute the Agatston Score.

The baseline characteristics of the study sample are presented in Table 1, overall and separated by presence or absence of AAC.

STATISTICAL ANALYSIS: Data were summarized as means ± standard deviations or counts and percentages as appropriate. To obtain more stable estimates, less frequent stone constituents (struvite, sodium/ammonium urate, protein, cystine) were summed up to obtain a single “other constituents” variable. Univariate analyses were performed with the Spearman test and the Mann-Whitney test. To assess the association between stone composition and the AAC score we used logistic regression models with any AAC as the dependent variable and the stone constituents as the independent variables. The models were initially adjusted for age, gender, with and without adjustment for diabetes, high blood pressure and eGFR. For each constituent, odds ratios (OR) and 95% confidence intervals (CI) were expressed as a 10% change. P-value <0.05 was considered as statistically significant. All statistical analyses were performed with Stata version 15.1 (StataCorp, Texas, USA).