Hypovascular pancreatic mass: not only adenocarcinoma 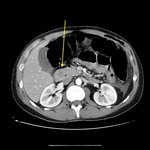 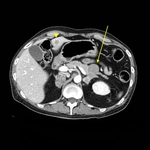 The diagnosis of hypovascular masses remains challenging due to overlapping in imaging appearance with other rarer encountered entities mimicking PDAC.

In treatment planning for PDAC it is necessary to obtain a histological characterization of the mass to start neoadjuvant chemotherapy treatment, but not to perform pancreatectomy if the clinical suspicion of pancreatic neoplasm is strong, even in case of a negative biopsy.

This management increases the sensitivity of the diagnosis but reduces its specificity, as it can be seen from study data that showed that about 7% of pancreatectomy interventions confirm the benignity of the identified lesions.

When the ventral bud of the pancreas is not perfectly migrated in its anatomic position, pancreatic parenchyma surrounds the duodenum with the main pancreatic duct that exceeds and surrounds the main biliary duct.

This anomaly is frequently found in pediatric patients and may develop intestinal obstruction, while in adults, it can be absolutely asymptomatic or may be observed as an accidental finding after an episode of pancreatitis. The annular pancreas may also be incomplete with the parenchyma portion surrounding the duodenum only anteriorly or posteriorly.

MRCP can easily demonstrate the presence of pancreatic duct surrounding the duodenum. 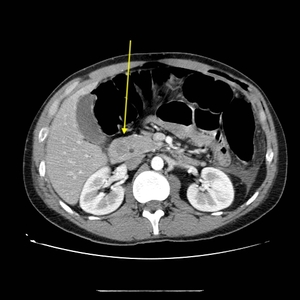 The most common mimiker of PDAC is chronic pancreatitis (CP), which may appear in the early stages with a diffuse or focal hypoenhancing lesions.

The definition of CP includes a wide range of pancreatic diseases, classified in various subtypes.

Typical findings on CT include irregular dilatation of MPD and side branches (68% of cases), parenchymal atrophy and fibrosis (54%), pancreatic calcifications (50%). Other less frequent findings are lymphadenopathy, fluid collections (30%), biliary duct dilation (29%) and peripancreatic fat alterations (16%). No remarkable findings are found in at least 7% of patients.

Focal development of CP may lead to hypointense ill-defined lesions and typical asymmetric involvement of the gland with localized atrophy or enlargement (30% of cases); this can lead to diffuse or localized altered parenchymal enhancement that mimics PDAC. 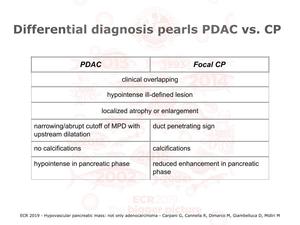 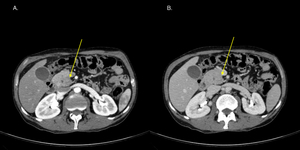 Autoimmune Pancreatitis (AIP) is a form of chronic pancreatitis with autoimmune etiology, characterized by a lymphoplasmacytic infiltrate of CD4+ T lymphocytes and immunoglobulin G4 plasma cells, that locates around the pancreatic ducts. This infiltrate determines focal fibrosis with mass effect.

Type 1 is a pancreatic manifestation of IgG4-related systemic disease, more common in males aged over 60 and presenting frequently with jaundice.

Type 2 is a pancreas-specific disorder, idiopathic with no or very low IgG4-positive plasma cells, presenting with swelling of the pancreas and duct-centric chronic pancreatitis more frequent in young people and presenting with abdominal pain.

Depending on the extension of the fibrosis AP is morphologically classified in diffuse or focal.

Typical findings on CT include diffuse pancreatic enlargement in diffuse type ("sausage-shaped pancreas"), while there can be focal parenchymal enlargement (28-41% of cases), more frequent in the body or tail with loss of lobules associated with atrophy of the remaining part of the gland.

Focal localization of AIP may show a hyperdensity in portal venous phase compared to the surrounding normal tissue.

The lack of inflammatory change around the organ help differentiating from the acute pancreatic disease. Irregular narrowing or stenosis of the pancreatic duct may be present, giving the duct penetrating sign.

For differential diagnosis, MRI and MRCP can be crucial showing a typical halo that surrounds the pancreas in T1-weighted images, associated with diffuse or localized hypointensity of parenchyma on T1, and diffuse and irregular narrowing of MPD. 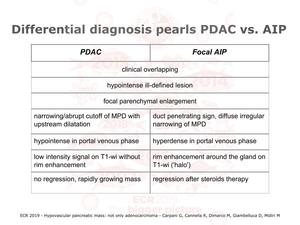 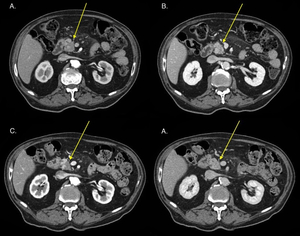 Typical findings are the evidence of a hypodense sheet-like amount of tissue between pancreatic head and duodenum or of a hypodense lesion in the pancreatic head, near the second portion of the duodenal wall, creating a mass-like effect on duodenum that can lead to duodenal stenosis. The association with a  circumferential duodenal wall thickening if present can help in the differential diagnosis.

Non-Hodgkin lymphoma is a heterogeneous family of lymphoid malignancies, which typically develop in lymph nodes but may occur in almost any tissue.

The pancreas is involved from the lymphatic system in about 30% of cases of NHL.

Pancreatic head is the most frequent localization of the disease, presenting as a diffuse parenchymal enlargement mimicking acute pancreatitis in diffuse form or as a hypovascular area of enlargement in focal localization.

Bile duct obstruction is a rare finding so as the presence of a bulky mass.

Pancreas is a rare (2–4% of pancreatic masses), but yet the possible site of metastatic localization by hematogenous dissemination from primary tumors of the kidney and lung. Other less common primitives may be breast, melanoma, adenocarcinoma of GI tract, osteosarcoma or HCC.

Renal cell carcinoma is the most common primary malignancy in cases of detection of pancreatic lesion suspected as metastasis (30% of cases); in this case, the pancreatic lesion will be hypervascular on CT, although some studies suggest hypovascular behavior in 50% of the cases evidenced in MRI. Renal cell carcinoma may metastasize even 20 years after initial presentation or treatment.

Lung cancer is the second most common primary site in cases of metastases to the pancreas, accounting for 23% of pancreatic metastatic lesions. 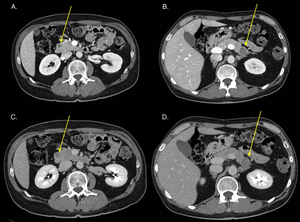 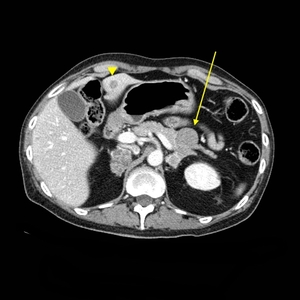 Group of rare tumors classified in functioning and non-functioning. They are usually diagnosed randomly in the 4th to 5th decade of life, but in many cases, they are already metastatic to the liver.

Over 50% of PNET are malignant (with the exception of insulinoma, about 10% of cases). 10% of PNETs can also be associated with inherited endocrine tumor syndromes (MEN 1, NF-1, Von Hippel-Lindau disease, and the tuberous sclerosis complex and GCGR-related hyperglucagonemia).

Typical findings include detection of a solid mass, often well-circumscribed, avidly enhancing in arterial phase. Rarely, they may also appear hypovascular and need to be differentiated from PDAC. Unlike adenocarcinoma, duct obstruction is uncommon and they are often large and associated with neoplastic thrombosis.

Rarely they can demonstrate heterogeneous and atypical enhancement (fig. 24-25-26).