Fig. 23: Butterfly sign in a pacient with glioblastoma. (A) Coronal T2 MRI.

Fig. 25: Patient with posterior fossa infarct. (A) T1 post-contrast and (B) diffusion...

Fig. 32: Multiple hyperintense lesions in a patient with multiple sclerosis. (A)...

Intracranial ring enhancing lesions of different etiologies have a similar appearance on conventional MRI. These lesions may present as solitary or multiple and are characterized by a contrast enhancing halo with a non-enhancing center.

"MAGICAL DR" (Fig. 2), is a mnemonic used to help remember the differential diagnosis. 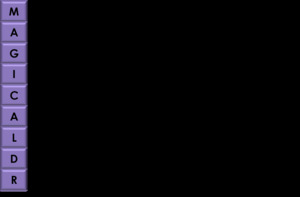 In this pictorial review, CT and particularly MRI findings of intracranial ring enhancing lesions are addressed and the most important imaging features for their differential diagnosis are presented.

As we approach a ring-enhancing lesion, there are some fundamental points that are important to analyze in order to achieve the correct diagnosis such as clinical features, medical history and radiologic findings (Fig.3). 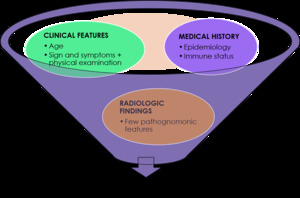 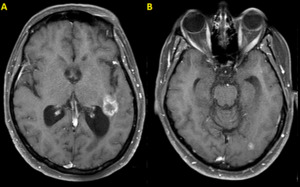 Fig. 12: Brain metastases in a 41-year-old woman with ovarian tumor. Axial post-contrast T1 MR images (A) and (B) demonstrate metastatic deposits, the largest lesion with ring-enhancement adjacent to the left posterior horn of the lateral ventricle. 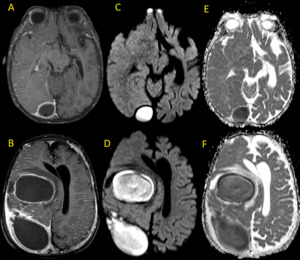 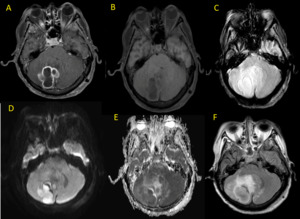 Occasionally there can be ring-enhancement following infarct, usually in the subacute stage. The enhancement can have a confusing and bizarre appearance, even mimicking tumors.

Neurocysticercosis (NCC) is the most common parasitic disease of the central nervous system, and also one of the most common causes of seizures in endemic areas (Latin America, parts of Oceania, Asia, Eastern Europe, and Africa).

NCC is caused by the ingestion of larvae from the adult tapeworm Taenia solium.

Neuroimaging of parenchymal NCC depends on the stage of the development of the parasites.

In the vesicular stage the cysticerci appear as cystic lesions within the brain parenchyma. CT and MRI reveal that the cyst wall is thin and well demarcated from the parenchyma, without perilesional edema and do not enhance. There may be a bright nodule in their interior giving the lesion a ŌĆ£hole with dotŌĆØ appearance that represents the scolex.

As the cysts begin to degenerate they appear as ill-defined lesions surrounded by edema which enhance after contrast medium administration. This is the colloidal stage of the cyst and represents the so-called ŌĆ£acute encephalitic phaseŌĆØ of NCC. MRI reveals a thick and hypointense wall with marked perilesional edema.

Granular cysticerci appear as nodular hyperdense lesions surrounded by edema or a rim of gliosis after contrast medium administration. 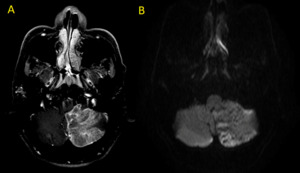 Fig. 25: Patient with posterior fossa infarct. (A) T1 post-contrast and (B) diffusion axial MR images. Note Irregular ring-enhancement in A. 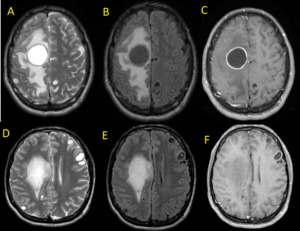 Both traumatic and nontraumatic intraparenchymal hemorrhage can show ring enhancement in the subacute to chronic stage. 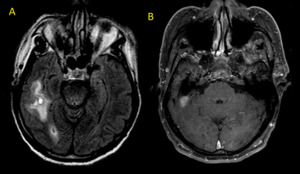 Fig. 26: Patient with a history of head trauma. Axial MR Images (A) FLAIR and (B) post-contrast T1. Oval lesion with ring enhacement is seen on the right. Also note perilesional edema. 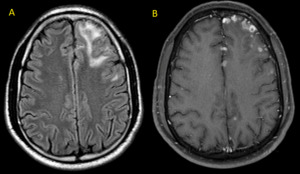 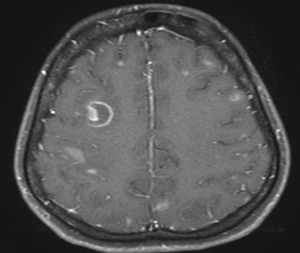 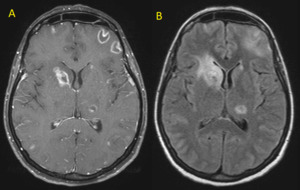 Fig. 29: Neurotoxoplasmosis. Axial T1 post-contrast MR Image (A) and axial FLAIR (B) show the eccentric target sign which is highly suggestive of this infection. 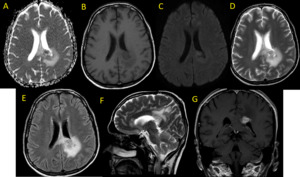 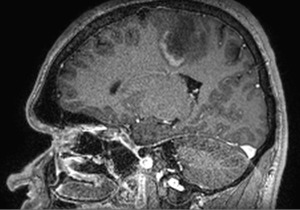 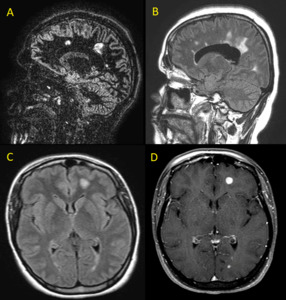 Fig. 32: Multiple hyperintense lesions in a patient with multiple sclerosis. (A) sagittal DIR, (B) sagittal FLAIR, (C) axial FLAIR and (D) axial post-contrast T1. DawsonŌĆÖs fingers is best seen in sagittal images. Also note enhancement of some of these lesions.

Ring enhancement is frequently observed in resolving intracerebral hematoma. The proposed mechanisms of the enhancement in this condition include blood-brain barrier breakdown, vascular granulation tissue, and luxury perfusion. 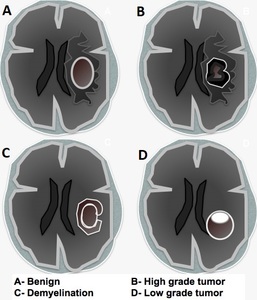 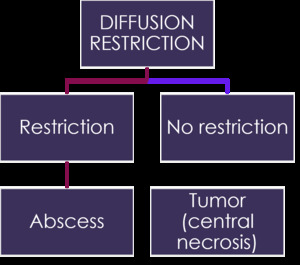 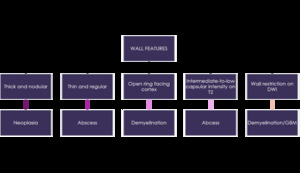 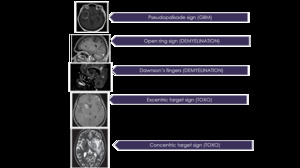